Just an early reminder, the S.A.L.T. Club will once again host the longest running tournament in Texas, their annual Memorial Day Classic, May 26, 27 28 out of their club house on Pleasure Island.For more information call 409-626-2501 or drop by Outcast Arms and Tackle in Groves and visit with Steve.He has a stack of entry forms as well as information concerning everything that will be going on across the weekend.

After two days of howling winds that blew out the entire weekend, we awoke to perfect conditions Monday morning.The water clarity was shot thanks to all of the wind, but the lake was dead calm.Invariably when blessed with one of these rare days, we immediately run all over the lake just because we can, rather than fish.

That was not the case Monday as Steve Sand’s main goal was to catch a few flounder for visiting relatives.We cruised the shoreline only as long as it took to find a little clearer water running out of the marsh.As it turned out, we should have gone ahead and run all over the lake as the initial stop served up nothing more than casting practice.

Our fourth stop of the day finally produced a fat three pound flounder on the first cast that was full of tiny shad.Steve switched to a black/chartreuse curly tail crappie jig rigged on a 1/8^th horsehead jig that the fish liked even better than Gulp and we finished the morning with seven fish between two and three pounds.We caught and released that many undersized fish as well.

Now comes the best part for those of you that have the patience to wait on a flounder while an easier trout or redfish bite is taking place at the same time.Steve not only changed lures, but the way I normally fish it as well.

As soon as he noticed the small shad that the flounder were spitting up on the floor of his boat he made the change that saved our day.I can make that assertion with some degree of confidence as I continued to fish the same jig and caught far less fish!

Steve opted to quit fishing his jig slowly across the bottom and tied it on no more than a foot of leader under a Mansfield Mauler.The Mauler produces far less noise than any other cork, but it does keep your lure suspended as it rides the current out of the drain.

“We started doing this a few years back anytime we found those pods of little shad swimming down the bank,” pointed out Sands.“The quieter pop of the Mauler attracts the flounder rather than frighten them.”

It only took fifteen years to make the connection, but I can’t count the times I saw Nick Wingate anchored up just outside a drain fishing the same technique.It just didn’t make sense at the time, but no one caught more fish or knew more about this area from Adam’s bayou all the way to the short rigs than Nick.He could catch fish in the middle of an asphalt parking lot!

I haven’t had an opportunity to confirm it, but how many times have you seen flounder jumping out of the water in pursuit of small baitfish and you couldn’t get the first bite.This technique may well be the solution to that problem and I would expect redfish to also crash the party. 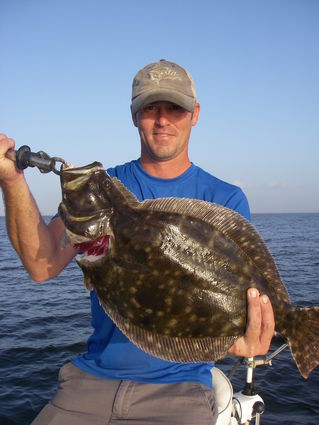 The dirtier water and too much wind apparently hasn’t slowed the red hot bass bite in the river and surrounding marshes.A young man named Kyle something, my hearing gets worse every day and the wind wasn’t helping, stopped us on the way back to the launch to see if we could weigh a bass that he had just caught.

We did and his bass weighed a little over six pounds.He also had several more in his ice chest that would push the three pound mark. He said that he is catching better numbers on worms, but bigger bass on crankbaits. He also stated that he fishes only in the afternoons.

The young man was able to successfully release his big bass only because he had just caught it.Everyone around here is excited about the potential for catching a double digit bass, but the chances of that happening are very slim if you keep them when they weigh half that much!