BC girl out to change the world 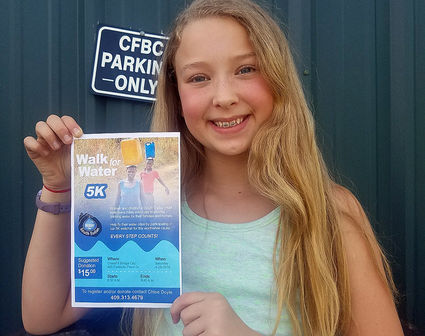 You’re never too young to change the world.

That’s what Bridge City fifth-grader Chloe Doyle is proving with this weekend’s Walk for Water 5K in Bridge City.

But it was inspired by 11-year-old Doyle, with the help of Bridge City Intermediate teacher Krista Richard.

“We were reading a true story, ‘Long Walk to Water,’ about people in South Sudan, who had to travel miles each day to get water,” Doyle said.

“I was inspired to do something for a cause that helped build water wells in South Sudan.”

Water for South Sudan drills fresh water wells in South Sudan, one of the world’s poorest countries. People there often carry water buckets weighing 40 pounds on their heads in order to provide clean water for their families.

Since 2005, WFSS has drilled 304 wells, bringing fresh clean water to hundreds of thousands.

The 5K will begin at 8:30 a.m. Suggested donation is $15 per runner, but any amount is welcome. Runners are invited to wear a weighted vest for this 5K.

Doyle said she found out about WFSS because of a school research project.

“I thought it would be a good way to get started,” she said.

Response has come “pretty quickly,” she said. “I didn’t think we’d have as many signed up as we do.”

The Facebook page for CrossFit Bridge City includes a link to donate.

“She put the whole thing together,” Chloe’s mother, Carrie Pugh, said of the 5K, obviously impressed.

“It all was sparked by the book. She’s a very sweet, sweet girl. She’s got a big heart.”