The Cardinals had their eyes set on winning District after last weeks game.

After Peyton Havard’s one-hit, 11-strikeout shutout pitching masterpiece led the Bridge City boys to a 1-0 win in a pitchers’ duel with Orangefield April 20, the two teams met Tuesday to close the District 22-4A season.

Orangefield’s Blake Bradley allowed only three hits in a seven-inning pitching performance against BC. Kent Michael picked up the Bobcats’ only hit, a third-inning single.

Logan Hamm, who was 2 for 3 for Bridge City, scored the game’s only run in the top of the sixth. Caleb DuBois singled him home, after Hamm singled and advanced on an error.

The Bobcats took a 20-1 win over West Orange-Stark on Tuesday, April 17 to complete a sweep of the Mustangs, with Kadeon Evans picking up four hits -- two singles and two doubles.

Kaiden Dubose, Johnny Armstrong, Brett Fregia, Mason Gonzales, Evans and Blake Bradley all pushed runners across the plate with RBIs in the fifth.

Gonzales was the winning pitcher for the Bobcats. He allowed four hits and one run over five innings, striking out four.

In all, Orangefield picked up 17 hits against WOS. Evans, Michael, Dubose, Fregia and Gonzales all had multiple hits.

Another high-scoring April 17 game was Bridge City’s 17-11 win over Hamshire-Fannett.

Justyn Romero rapped out three hits and four RBIs in the game.

HF scored seven runs in the first inning, but the Cardinals still managed to pull out the victory.

The offensive firepower was led by Hamm, Luc Hollier and Havard, who each had RBIs in the inning.

The Cards scattered 18 hits in the game. DuBois, Romero, Hamm, Gavin Green and Schuyler Thibodaux all had multiple hits for BC, with Hamm, Romero and DuBois each getting three hits.

Against Big Sandy, DuBois was the winning pitcher, allowing no runs and two hits over two innings, while striking out two and walking one.

The Lady Cardinals softball team, District 22-4A champions, will play Jasper in a single-game bidistrict playoff.

The Lady Bears softball team will play a best of three bidistrict playoff series against Huntington this weekend, April 26-28.

All games are set for Silsbee High School.

Admission is $5 for adults and $3 for students.

The Lady Bobcats, 21-10 on the season, will take on Lufkin Hudson in bidistrict softball playoffs this weekend, April 26-27.

Orangefield enters the playoffs as 22-4A’s fourth seed after falling 3-0 in a tie-breaker game with Silsbee Monday. 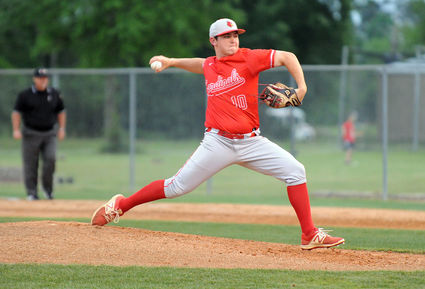 Kaylee Ancelot got the pitching win in the four-inning game, throwing 2 innings giving of no-hit ball with 2 strikeouts. Codie Sorge completed the game, going 2 innings with 3 strikeouts on 1 hit.