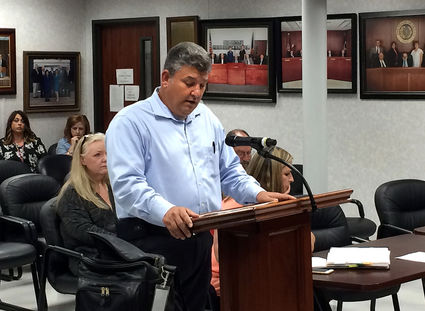 Cutline 1: Incoming Orange County Judge Dean Crooks addresses County Commissioners from the audience side of the courtroom for the last time Tuesday. Crooks will begin his new job Wednesday, May 2.

Incoming Orange County Judge Dean Crooks didn’t get to sit and vote with the rest of Commissioners’ Court Tuesday but that didn’t keep some business from getting transacted in a hurry.

Commissioners needed less than an hour to first agree and vote that Crooks needed to pay a $1,000 bond as a requirement for office, and, after other business, go back and receive from Crooks the required check and necessary paperwork.

Then Crooks submitted paperwork to reject the nearly $20,000 county judge pay raise voted in by commissioners in during the Hurricane Harvey disaster in September of last year.

The increase moved the county judge pay from $85,500 a year to $105,040, a bump of more than 22 percent. Former County Judge Stephen Brint Carlton and commissioners Jody Crump and Barry Burton declined their raises, through the end of their current terms.

Burton, Crump and Carlton were then defeated in their re-election bids in March, after Crooks’ campaigning included a vow to reverse the 2017 commissioners’ court raises.

“I understand that I have no legal obligation to waive any increases that have been approved by commissioners’ court,” Crooks said.

“I believe that a discussion regarding the compensation for the four county commissioners and the county judge is in order due to the circumstances surrounding that pay increase for those five positions alone.”

Crooks said the discussion should come during this summer’s upcoming making of a 2018-19 budget.

“In the meantime, I also believe strongly as the recovery from Harvey continues to inflict economic havoc that it is important to lead from the front and gain the confidence of the citizens I serve,” Crooks said. “To that end, I request that my county-provided salary remain at $85,500 until Jan. 1, 2019 -- assuming I’m still in office.”

Crooks was named a week ago by all four commissioners – Crump, Burton, Johnny Trahan and John Gothia – to fill out the remaining eight months of Carlton’s term.

With Crooks’ opponent for the November election, Democrat Donald Brown, officially withdrawing last week, Crooks is in line to serve at least through Dec. 31, 2022.

Crooks was actually sworn in last Wednesday, taking the oath from Pinehurst Mayor Pete Runnels, who is a former county judge that served as Crooks’ campaign treasurer.

But he couldn’t take his seat without paying the bond, and since there’s little precedent for replacing a county judge mid-term, the commissioners had to create one. All elected county officials have to post a performance bond with the county’s insurer.

“We all have to do it,” Gothia said. “It’s just normally, when we got elected in (in November of an election year), it’s done well before we get sworn in (on January 1 of the following year), so nobody ever sees that.”

So Crooks spent his Tuesday in the audience. But he wasn’t complaining.

“There’s no need to do it fast,” he said. “We can do this right, one thing at a time and make sure it’s correct.”

However, he left little doubt he planned to hit the ground running on his first official day in office, Wednesday. He scheduled early meetings with several department heads.

Her report included news that the EDC was working with a site location partnership to represent Orange at out-of-town conferences, attending a Japan-Texas summit regarding disaster recovery and upping its magazine advertising to include, among others, the Houston Astros game program.

Commissioner Burton was absent Tuesday, but in his stead, Gothia, Trahan and Crump approved proclamations declaring this Soil and Water Stewardship Week and May as Elder Abuse Prevention Awareness Month.