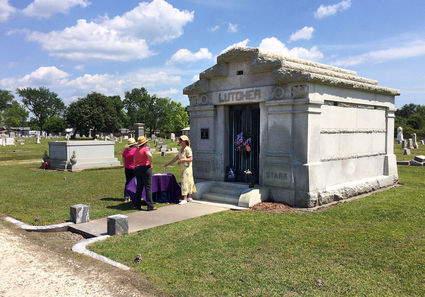 Picture: Jenniffer Hudson Connors, right, of the Stark Foundation Library, shares stories about the Lutcher Mausoleum with patrons at Sunday's 'Walk in the Past' at Evergreen Cemetery. The event was organized as a fundraiser for the Heritage House Museum, which is still trying to recover from Hurricane Harvey.

The folks from the Heritage House Museum knew what they were talking about when they titled last weekend’s tour of Orange’s Evergreen Cemetery a “Walk In The Past.”

The 140 acres of real estate between Border and 10th Street a few blocks south of downtown is the final resting place of many of Orange’s pioneer families.

Mausoleums for the Lutcher, Brown and Stark families stand out in the middle of the cemetery. But other plots and century-old markers for the likes of the Ochiltrees, Bancrofts, Wingates and Harmons are impressive in their own right.

There are more than 15,000 people buried at Evergreen, with room for 3,000 more, says Roland Wolfford, general manager since 2000.

“This cemetery’s over 200 years old,” Wolfford said, “and we’re trying to make it better than it was.”

A cleanup was underway before Hurricane Harvey, with new fencing and a new headquarters building dedicated to the memory of longtime board member Roy Wingate, was just recently completed.

Sunday’s cemetery walk included a stop at the adjacent gravesites of Orange police chiefs Ed O’Reilly and John Godwin. They were murdered three months apart in 1935.

O’Reilly was shot and killed by the minister at the First Baptist Church, the Rev. Edgar Eskridge; and Godwin was shot dead by a robber, Clyde Dawson, three months after being named O’Reilly’s replacement.

According to the Heritage House Museum, Evergreen Cemetery isn’t quite 200 years old. The land, originally 35 acres purchased in 1835 by Robert Jackson, was believed first used for a burial ground in 1840.

The land was called “City Cemetery” until 1898 when it became known as Evergreen.

A number of the headstones in the cemetery look like logs. They were death benefits to members of the Woodmen of the World, a fraternal organization that provide life insurance for its members.

The organization, founded in 1890, still exists today as WoodmenLife.

The Masonic Lodge, Shriners and IOOF, the International Order of Odd Fellows, are other fraternal orders listed on some of the headstones.

A number of the late 19th- and early 20th-century headstones bear the emblems of the Confederate States of America, as the men were veterans of the Civil War.

The cemetery includes veterans of every war since.

Wolfford has worked at Evergreen for more than 20 years.

He’s seen it through Hurricanes Rita, Ike and Harvey, with plenty of smaller storms in between.

“I think counting Rita and Ike, there were a total of 17 trees that we took out of there,” he said. “Most of them were beautiful cedar trees.

“During Ike, we had at least two feet of water but Harvey wasn’t so bad.”

Evergreen is operated by the non-profit Evergreen Cemetery Association. The officers and board of directors meet every other month.

Operating funds come from the sale of lots, burials and donations.

“It’s a not-for-profit cemetery,” Roland Wolfford said. “We do what we can with what we’ve got.”

Sue Denosowicz is the museum curator.