BRIDGE CITY HIGH SCHOOL MAY STUDENT OF THE MONTH 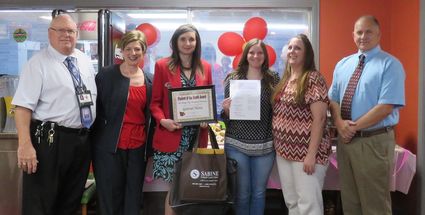 The Bridge City Chamber of Commerce is pleased to announce that the May Student of the Month for Bridge City High School is Gabriel Howe.

Gabriel was presented her certificate and gift bag by Ambassador Maureen McAllister, President and CEO of United Way of Orange County, at the May Networking Coffee hosted by Las Rosas Mexican Restaurant.

Gabriel is the daughter of Tracia Howe. She is ranked #10 of 197 with a GPA 4.46. Gabriel’s Awards and Honors include:

Gabriel’s Clubs and Organizations include:

In community service, Gabriel has volunteered at:

James Black, Social Studies Teacher, said, “Gabby is a student leader who is confident in her abilities and thirsty for knowledge.

Whether in the classroom, extracurricular activities, or on the court, Gabby never fails to give one hundred percent effort in everything she attempts.

She epitomizes the modern student athlete.

While maintaining her high academic standing at BCHS, Gabby has also been a member of the basketball team, band, One Act, student council, the fishing team and has been our high school mascot on the cheer team.

In addition, she joined One Act Play this year, and despite being new to acting, she brought home several awards for her performances.

Gabby seems to possess an inexhaustible energy supply and she applies that energy to all of her endeavors.

It is apparent that her drive and dedication existed long before we met and will continue to be the driving force in her collegiate career and beyond.

While at Bridge City High School, Gabby has always challenged herself academically.

She is an active member of the National Honor Society has also been a member of student council since her freshman year.

As her Social Studies teacher at Bridge City High School, Gabby has never failed to impress me with the quality of her work or the content of her character.

She is always an active participant in class, quick to grasp difficult concepts, and eager to assist her fellow students.

She possesses excellent analytical and verbal skills that make her an ideal student and a pleasure to have in class.

I am so proud of Gabby and all her accomplishments at Bridge City High School.

It was her attitude of determination and laser-like focus that first made me notice her, and I knew she would become a standout of our student body and our community.

Stacy Webb, Theatre/Media Communications Teacher, said, “It is no surprise that Gabby Howe is the May student of the month.

As Gabby’s theatre director, I have had the privilege of working with her intensely for the past five months.

Albeit any training, Gabby was cast the lead in our 2018 Competition One Act Play.

Gabby portrayed the character, Gaynelle Verdeen Bodeen, the “The Red Velvet Cake War”, and her physical comedy was reminiscent of Lucille Ball.

During rehearsal, Gabby Howe had an amazing work ethic as she was constantly reliable, had a terrific attitude, and she worked hard to improve.

The result of these characteristics gained her many awards at each level of competition, including District and Bi District’s Best Actress.

It has been a pleasure spending time with this young lady, and there is no doubt that she will succeed no matter what endeavor she chooses after high school.

Thank you for your leadership GABBY!”

When asked about her future plans, Gabriel said, “I plan to obtain my degree as a Registered Dental Hygienist, and further my education to receive a Bachelor of Science Degree in Dental Hygiene.”