Electrician from Down Under remembers Texas brother 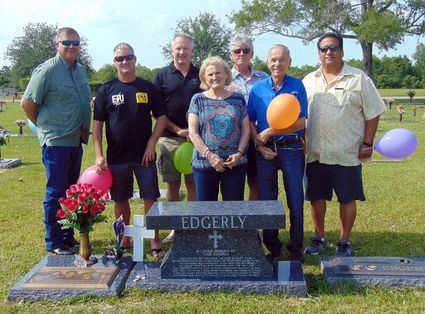 Garry Rogers puts the "brother" in the International Brotherhood of Electrical Workers.

Rogers traveled from Brisbane, Australia to visit the grave of Todd Edgerly, a fellow union electrician who died from cancer nearly six years ago. He joined Todd's parents, Gene and Flo Edgerly, and some other IBEW friends: Eddie Smith, George Crawford, David Gonzales and Justin Page, also of Australia.

Crawford said Todd visited Australia several years ago on behalf of the IBEW and he made many friends there. He said Rogers requested to see his fallen American comrade to honor and respect him at Hillcrest Memorial Gardens in Bridge City. They concluded with a toast of cold beer.

Rogers and Page will visit Houston next and then go to New Mexico and Arizona before returning home.

"Gene and Flo have been very close friends for many, many years with labor organizations. They are highly respected," Crawford said. "Todd was part of that same mold. He left us too soon."

Todd was 48 when he died on Aug. 5, 2012. He graduated from Bridge City High School in 1982 and IBEW Electrical Apprenticeship Program. He worked as a union organizer for the IBEW Local 479.

Rogers said he first met Todd and his parents 12 years ago in Texas. Rogers and Todd are the same age. When he picked Rogers up, he was playing "Thunderstruck" by ACDC. Todd said he knew something about Australian music.

Rogers said after his visit they became very, very close.

When Todd later visited Australia Rogers returned the favor and played "Born in the USA" by Bruce Springsteen.

When he picked up Todd in Brisbane, he said Australian women aren't like American women because they cuss, swear and spit at you. Todd replied he knew some Texas women like that.

"He had tears in his eyes, but I introduced him to some women and that cheered him up," Rogers said laughing.

They stayed in touch through Facebook. That was how Rogers discovered his friend was sick. Rogers wrote an entry in a local Texas newspaper about their brotherhood and he also sent in money from Queensland, Australia to a local fundraiser for Todd.

Flo said there were more than 1,000 in attendance for Todd's funeral. One of the songs played was Willie Nelson's "To All the Girls I've Loved Before."