His first week in office was a busy one.

New Orange County Judge Dean Crooks, who officially went to work for the county last Wednesday, started that day with a breakfast meeting with some department heads.

Tuesday afternoon, minutes after calling for adjournment to the first Commissioners’ Court under his oversight, Crooks was gathering more department heads for another meeting.

“A lot of work that’s done is not done up here,” he said, indicating the Commissioners’ Courtroom.

“We’ve hit the ground running, and we’re going to start getting some things fixed.”

Among the priorities Crooks touched on during Tuesday’s court meeting and in an interview were speeding up federal and state reimbursement for Hurricane Harvey expenses, speeding up the repair of county property and addressing a problem of employee turnover.

The best piece of news on Tuesday’s agenda was another successful Jail Inspection by the Texas Commission on Jail Standards.

It was at least the ninth year in a row for Orange County’s jail to be found in compliance with state requirements in a surprise inspection.

“All the inspections are unannounced, so you’ve got to be ready every day,” Sheriff Keith Merritt said. “I can’t tell you how proud I am of the people that work in our jail.”

Merritt said it was even tougher considering too-frequent turnover in his department which he had mentioned a few minutes earlier.

“We’ve had eight employees leave since October, 2017 [the start of this current budget year],” Merritt said. “Since 2016, we’ve lost 39 employees at the Sheriff’s Office and a lot of experience.”

”The Sheriff has been talking to commissioners’ court for some time, and so have other department heads, too,” Crooks said.

“We want to retain and recruit good employees. We’re going to look for ways to bring in good people and keep the good people that we have. And I’m telling you, that’s a priority.”

Crooks said Harvey recovery had occupied most of his first week.

“It involved recovering from Harvey and trying to get our reimbursements done and preparing for the next hurricane season,” the judge said. “There’s not even a close second. It’s far and away the biggest thing I’ve been doing for the past week.

“And we’ve got a lot more work left to do on that.”

Crooks said the county had missed some deadlines to get earlier reimbursement based on estimates.

“There were some things that weren’t done that need to be caught up on,” he said. “And we’re getting on top of those, so we can get the folks in Orange County reimbursed for their tax dollars that we’ve been spending, primarily for debris removal.”

Since the start of April, the county has written checks for more than $5 million to Ashbritt Environmental and Tetra Tech for storm debris removal.

Orange County has received no state or federal reimbursement, so far.

“We’re having to do things by the numbers, step by step by step, getting invoices and information into the state, and to the Feds,” Crooks said.

“This is a very time-consuming process.”

Kathy Nagel, mayor of Pine Forest, appeared with Kevin Singleton, mayor pro-tem, and made a request for the county to support a $60 million grant request from the state for a flood control project.

Commissioners voted 5-0 to back it.

Justice of the Peace Joy Dubose-Simonton requested and was granted at least the 12th purchase of a nearly $5,000 copier by county department heads since the March 6 election in which Crooks defeated Carlton.

Commissioners OK’d the payment of $634,000 in bills, including $164,000 to United Healthcare for retired group insurance for the months of April and May and $277,000 to the Port of Beaumont.

The payment to the Port of Beaumont for subcontractors who worked on the old Highway 90 project on the west side of the Neches should be reimbursed to Orange County by the state, said Auditor Pennee Schmitt. 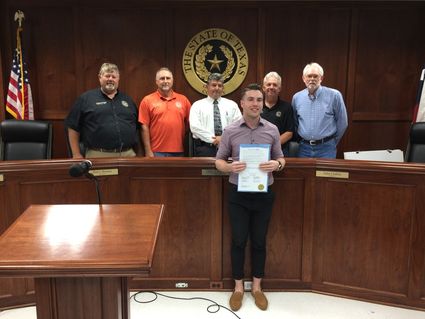