Orange County senior citizens are nearly golden. Well, in one more year they will be.

Texas A&M AgriLife Extension and the Committee on Aging held the 49th annual Senior Citizens Rally Day Tuesday at the Orange County Expo Center on FM 1442. This year's theme was Feelin' Groovy to be Healthy. Many attendees dressed up in 60s and 70s clothing.

Sandra Cole, of Orange, attended the event for the third time. Her favorite part is visiting with people she hasn't seen for a while. She also likes the good food and the music.

Pam Honeycutt, with the Committee on Aging, echoed that sentiment. She said it's a fun thing to attend and makes for a fun day.

"The only time we get to see others is when events such as this are held and at funerals. It's good to see familiar faces," she said. "We have a great turnout. I'm real pleased with the amount of people here to eat good Sloppy Joes and Twinkies."

Honeycutt said the rally is the largest event of the year put on by the committee. It takes six months to put it together and six months to get over it.

"This is an excellent facility (Expo Center) for us. The VFW (in Orange) has been so gracious to us over the years," she said.

Foster said Dorothy Ivies started the committee in 1965. She later organized the rally and passed it on generation by generation.

Fallon started with Orange County four years ago. In fact, her first assignment was organizing the rally. 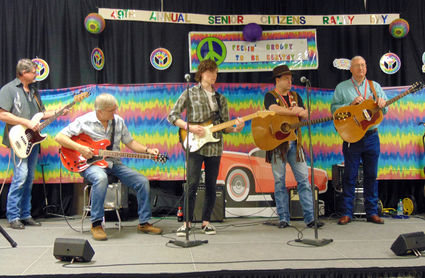 "They see everybody, see vendors, have fellowship and enjoy the music. It doesn't hurt that there's a free lunch either," she said.

The vendors may have information on health topics, hospice, funeral homes, the food bank, the Lion's Club Eye Bank, with new vendors being added every year.

"The people still came out, even with (the aftermath of Hurricane and Tropical Storm) Harvey. It's a great event. We hope the people always keep us in mind."

One humorous incident occurred when Texas Ferguson of The Cove was one number away on his ticket from winning a door prize. The lady standing behind him in line had the correct number and won the prize.