Picture: Bridge City Cardinal pitcher Peyton Havard delivers one of 95 pitches the sophomore tossed in Game Two of the bi-district round against Hunnington on Friday. Havard only allowed two hits in the Cardinal's 8-1 victory. RECORD PHOTO: Mark Dunn

The Redbirds improved to 23-7-1 with 8-2 and 8-1 wins over the Red Devils, capping the series with a four-RBI performance by Schuyler Thibodaux.

The senior doubled home a run in the first and recorded a three-run inside-the-park home run in the fourth in Friday’s close-out game.

Jacob Goodman won the series opener for Bridge City on the mound, surrendering two runs on three hits over five and a third innings, striking out four.

Romero threw one and two-thirds innings in relief out of the bullpen.

Caleb DuBois and Thibodaux each had two of BC’s eight hits Wednesday.

Peyton Havard had the magic mound touch for the Cards Friday, pitching six and one-third innings, allowing one run on two hits and striking out eight. Hamm closed out.

LCM’s baseball team, 30-5, hosts Game 1 of a best of three area round playoff series against Huffman at 6 p.m. Friday at Don Gibbens Field.

Season ends for BC, LCM softball, OF baseball 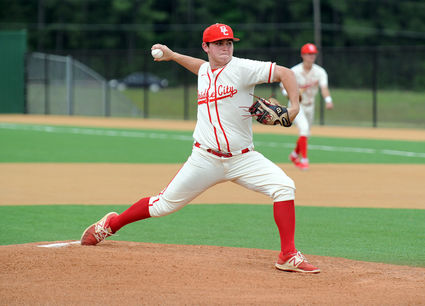 The Orangefield baseball team went out after losing a pair of 1-0 heart-breakers to Hudson in bidistrict.

The only run in Game 1 came with one out in the bottom of the seventh. Blake Bradley allowed only five hits for Orangefield, while Gunner Jones had two of the Bobcats’ five hits.

In Game 2, Hudson scored in the top of the fifth while limiting Orangefield to two hits, one each by Mason Gonzales and Ryan Deutsch.