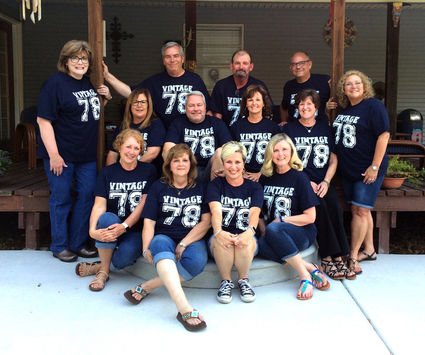 Photo: Members of the first West Orange-Stark graduating class are preparing for their 40th reunion set for 7 p.m. to midnight Saturday, June 2 at Sunset Grove.

There was plenty of anxiety and concern when it was announced that Orange’s Lutcher Stark High and West Orange High would be merging in 1977.

Students from both schools walked out of their classes and staged sit-in protests to make their feelings known.

“The West Orange people did not want Stark people coming to their campus and we did not want to go there,” said Annely McClelland Domas, a member of the first graduating class from the combined school, which was called West Orange-Stark.

“We were rivals when we played in football and basketball and baseball. We hated that Indian song and when that chief danced around.”

“There was a lot of talk about there were going to be fights and stuff,” he said. “But that didn’t happen. Actually, it went pretty smoothly.”

“After a couple of months, we all got along,” Domas said. “Even if some of the parents didn’t.”

Unlike the movie “Remember the Titans” or the real-life creation of Beaumont West Brook in 1982, racial issues were not a part of the WOS merger, Mike Giarratano said.

Orange schools had been integrated since the 1978 seniors were in the second grade.

Domas, Giarratano and Sigler were among about a dozen members of the WOS Class of 1978 meeting over the weekend to put final touches on planning for the 40th Reunion of the Class of 1978.

The event will be held from 7 p.m. to midnight Saturday, June 2 at the Sunset Grove Country Club. DJ Jimi Jams will provide all 70s music.

“It was slow at first,” Debbie Blanda Gregg said of ticket sales, “but now that’s it’s getting close to the event, people are starting to get interested.”

So far, the alum traveling the farthest is expected to be Carl Miller, coming from Idaho.

As for the merged student bodies getting along, Giarratano, said he and his wife Lesa Ricks Giarratano were just one of several couples that went from being crosstown rivals to married.

Mike came to WOS from West Orange and Lesa from Stark High.

“I knew some of the Stark kids from Little League or around town, but I’d never met my wife until I walked into first period English class,” Giarratano said.

For sure, a new school meant many changes for all.

The name, for instance. Although combining West Orange with Stark seems a no-brainer, it wasn’t the choice of most students.

From the Stark Tigers and West Orange’s Chiefs came a new mascot: Mustangs.

One school’s colors had been orange and white, the other purple and white. Combining orange and purple was an idea that did not fly.

The new school’s colors were royal blue and silver, although Domas revealed the blue was changed to navy a few years later because of difficulties matching the royal blue from one uniform manufacturer to another.

Evin Dugas recalled a big plus in the merger was getting to go to an air-conditioned school. Stark High, built in the early 20th century, relied on a few box fans for cooling.

Shawn Mumbach Hackler didn’t like being separated from the underclassmen.

“We were seniors and we were supposed to be top dog of all the classes, but we only had two classes,” she said. “There weren’t any sophomores or freshmen to boss around.”

For that first year, there were no tryouts for the WOS band, drill team or cheerleader tryouts. The two schools’ squads were simply merged, like the students.

“We had 120 on the drill team,” Domas said. “They stretched from end zone to end zone.”

The band numbered about 300, another costly group to outfit. There were two drum majors, just as there were two student government presidents: Sigler and Doug Farmer.

While teaching and coaching staffs were merged as well, outsiders were brought in to be principal – Lonnie Traylor – and athletic director – Steve McCarty – for the new school.

The theme of the first WOS yearbook was ”Putting the Pieces Together.”