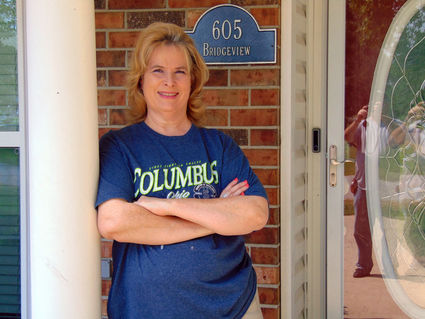 CUTLINE: Lisa Holton moved into her new home in Bridge City at the end of the year. She and her husband, Todd, wanted a smaller space. They plan to do some remodeling inside and out. Orange County Realtors are saying now is a seller's market.

Todd and Lisa Holton discovered they didn't need as much space as before after they became empty nesters.

Lisa said they decided to downsize by moving to a home across town from Larry Ward Drive to Bridgeview Street. Their new home was built in 2004. A detached garage to the home was completed in 2007.

"Our taxes kept going up along with the upkeep," she said.

Now that they've settled in, the Holtons are planning do do some adjustments to their new digs. For instance, Lisa said a wall in the dining room will come out be made into a larger room. They will also take out a closet in the entry hallway and expand a bathroom. In the front yard, several shrubs and palm trees were dug up that is now "an eye-pleasing yard."

The kitchen will be redone with new flooring, a larger island, new countertops and new paint to add 200 square feet to the interior.

"It was a gut-wrenching decision (to sell their old house), but it was time. We've became debt free with this house. We're both 57. It's time to think about retirement. This is more manageable. We have no regrets." Lisa said.

The Holtons are like many others in Orange County — either buying an existing home or building one from the ground up. In fact, realtors said they are holding their own in the housing market.

"Buyers are plentiful, but we like a happy medium. The housing inventory is pretty scarce," Horner said.

She added that the communities of Bridge City, Orangefield, Orange, Vidor and across the river in Jefferson County are plentiful.

"People want to get into the Bridge City community. It's a wonderful place to live. And there's job opportunities too," she said.

Horner said there was similar phenomenon following Hurricane Rita. After Hurricane Ike she said people were anxious about selling their homes.

"This time around people are being educated about buying and selling and they waited," she said.

Countryland started in Mauriceville years ago by Stephen Gault.

She said new construction is occurring in the Colonial Estates subdivision and Orangefield is booming. There's also a new neighborhood behind Game Day Car Wash on FM 1442 and in Bessie Heights.

"We're out of land," she said. "This is a seller's market. Now is the time. The market is definitely booming. It's been like this the last two years. It hasn't slowed down."

She speculates there could be more development with industrial expansions in Port Arthur and good school districts in Orange County bringing in people to the area.

Statistically, RE/MAX in the Beaumont market is rated number 10 in the Top 50 in the nation based on most transaction sides per agent.