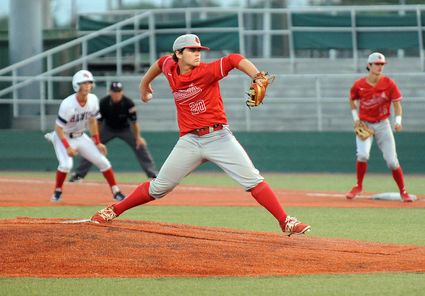 Bridge City Cardinal pitcher Jacob Goodman fires a shot during playoff action against Hardin-Jefferson. The Cardinals defeated HJ in the first two outings of the best of three to advance to the Region III Quarterfinals this week. RECORD PHOTO: Mark Dunn

A dramatic 3-2 opening win in Bridge City baseball’s area round playoff sent the Cardinals on to a two-game sweep of Hardin-Jefferson last weekend.

The Cards, now 25-7-1, will take on Jasper in the third round of the state playoffs this week.

The Cardinals used a Little League play – a double steal by runners on first and third – to score the winning run in the bottom of the sixth of the first game of a best of three series at Lamar’s Vincent-Beck Stadium.

With two out in a 2-2 tie, Cace Skinner led off the bottom of the sixth with a single. Peyton Havard’s single moved Skinner to third.

As Cameron Yadon dug into the batter’s box, Havard took off as if to steal second, then intentionally got caught in a rundown between first and second bases.

Skinner raced for home and the umpires, after a huddle, declared Skinner had reached the plate before Havard was tagged out for the third out of inning, letting the Cardinals count the run.

Relief pitcher Justyn Romero then retired the Hawks 1-2-3 in the top of the seventh to put BC one win away from the third round.

The Cards took a 1-0 lead in the bottom of the first when Romero followed up a Schuyler Thibodaux double with an RBI single.

BC took a 2-1 lead in the fourth when Luc Hollier’s single scored Caleb DuBois, who had started things with a leadoff single.

Romero got the mound win, entering the game to get the final out in the top of the sixth.

Bridge City pitchers Jacob Goodman and Logan Hamm combined for a four-hit shutout in Game 2 with Goodman getting the win.

Meanwhile, the Card hitters pushed across single runs in the first, second and fourth innings, tacking on two more in the top of the seventh.

LCM’s season ended with an outstanding 31-7 record Saturday when Huffman knocked the Bears out of the playoffs by taking their area round series 2 games to 1.

After a 4-2 Huffman win on Friday, LCM rallied in Game 2 Saturday in Crosby, scoring three runs in the seventh for a 4-3 win.

But Huffman, the District 23-4A champs, rebounded for a 7-1 win of Game 3 Saturday night.