Sight fishing is the best of both worlds 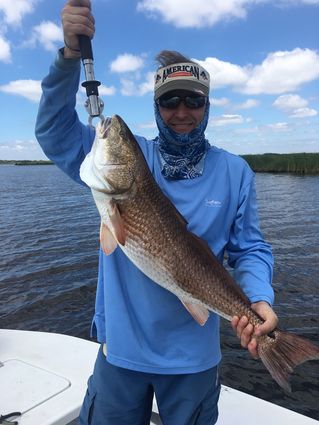 Pic: Chasing big fish in shallow water is a favorite technique for many anglers.

over a bright white endless Caribbean flat covered with air clear water. The

clarity is measured in inches rather than feet. From the poling platform I could

crabs and shrimp, it was classic as they showed their tails and easily gave away

their location. It was a no brainer, a gimme, as easy as you could ever expect

from one of the most wary fish that swims. All of the good vibes that came from

why am I doing this and not soaking dead shrimp someplace else. The frustration

success ratio, but on the day it all happens just right there is no better

feeling. If I had to put it all in perspective I get as much or more enjoyment

out of “coaching” an angler to a fish as I do catching one myself. I never

thought in a million years I could be in a boat all day long, never pick up a

rod, and call the trip a success. I routinely never cast on sight fishing trips

because I get such a kick out of watching clients, especially those who have

never tried this style of fishing. Hunters have the illness “buck fever” where

comes over the hunter and often causes them to miss. Well I have seen “redfish

fever” have the same effect on fishermen. You can take an accomplished caster

a big redfish well within range. Fly casters will wrap fly line around

themselves, the boat, and anything else in the immediate vicinity thanks to the

excitement of the moment. It get’s crazy sometimes, I guess that’s why we like

see well and that can be enhanced with quality glasses. Without a good pair of

polarized glasses you are basically fishing blind. There are a ton of good

glasses out there and they range in all types, styles, and price ranges. I had a

pair of 50.00 Orvis glasses that worked wonders for me for a long time. I

penny. The key to good glasses is to pay as much as you can afford because the

quality of glass used in each pair gets better as you go up in price. One very

valuable lesson is to not pinch pennies on polarized glasses, I promise you

there is a difference and you can tell it at the end of the day.

to a minimum. Remember if you can see the fish they can see you as well. Fly

to stay away from sudden moves as their outline is silhouetted against the sky.

pitching, the rod stays low and the movement needed to accomplish the cast is

minimal. Spinning gear is a great option for this technique, I have been a big fan

of the Okuma spinning reels for a long time, they handle everything I have ever thrown

at them and then some. The ease of casting light lures makes the spinning gear ideal in

about how you will read the water, make sure your version is the same as theirs.

will often pick out an object in the water and ask the client “how far is that?”

so I can get a fell for their ability. Some folks want you to tell them in feet

while others want yards. Fly fishermen seem to like feet while conventional

anglers prefer yards. Also get a common point on the boat where everyone uses as

12 o’clock, this will be the position from which all of the instructions start.

on the bow of the boat, I would call out “redfish at 2 o’clock going right to

left” and Hunter would look down at the numbers, adjust himself accordingly, and

make his cast. Incidentally we would also practice this at home as I would walk

around in the yard pretending to be a fish while Hunter would cast at me. It was

fish, my neighbors thought I was out of my mind but it worked wonders as Hunter

understood from that point on how to properly cast to these fish. To this day I

would rather have him on the bow of my boat than anybody, forgive me but I’m

started. Understanding how these fish react to different factors, reading their

body language, and putting yourself into position to catch them are all pieces

heartache and euphoria in equal amounts. Sight fishing is not for everyone but

can be. I for one can’t get enough and will keep trying as long as the big

fisherman upstairs continues to bless me with the opportunities.

Good luck on the water and enjoy every minute.