Award winner gives back to community who helped her 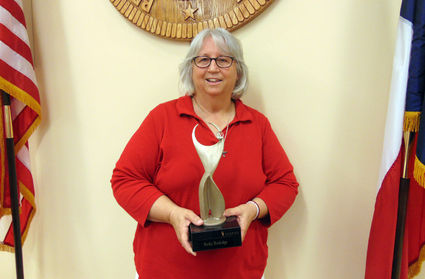 CUTLINE: Rebecca Rutledge won the ATHENA Award last week for serving on the Bridge City ISD Board of Trustees and other community organizations. She said she wants to give back to the community that helped her.

Since she's received her ATHENA Award, Rebecca Rutledge said looking at it inspires her everyday. Not just because she achieved the award, but because of the hope it inspires in others.

"I'm very honored to win this award," she said. "I was surprised I was nominated. I saw the list of the former winners. They are strong women who served the community."

Rutledge described the ATHENA as an international award for women who have contributed to the community. A luncheon was held at The Brown Estate on May 15. It was hosted by former ATHENA winners and some members of the Orange Rotary Club. First Financial Bank and Capital Title sponsored the event.

In fact, the former award winners nominate the newest award recipients. To them, Rutledge's community service stands out.

Since the inception of the ATHENA Award Program in 1982, over 5,300 ATHENA Awards have been presented in over 500 communities in the United States, Canada, China, Russia, United Arab Emirates, United Kingdom and most recently India, according to information from the organization.

The ATHENA Leadership Model captures women's unique experience and wisdom and forms the basis for fresh dialogue about leadership in the 21st century.

Rutledge has been on the Bridge City Independent School District Board of Trustees for more than 20 years, the city of Bridge City Planning & Zoning Commission for more than 25 years and her church board for 30 years. She also serves on the South East Texas Tennis Association board. She works at Old Castle Materials in Beaumont for more than 40 years.

However, it's her membership on the Leadership Southeast Texas as chair of the advisory council that made the biggest impression, she believes.

Nine counties in the region nominate someone for membership to the committee. Members also attend five class sessions each year to work out problems or celebrate all of the good things going on in Southeast Texas. For instance, they recently met in the federal prison in Beaumont to discuss mental health issues and cutting down on recidivism.

"Ten thousand prisoners are released in Texas with no means to support themselves," Rutledge said. "One of the main things we do is coalesce the region as a whole."

The committee started 26 years ago. Several business professionals serve on the board. Rutledge has served for 10 years.

Ever since her high school days Rutledge has been involved in community service. She served on the student council and she said while growing up in the 1970s there was always a protest on television that caught one's attention.

"I remember in 1968 I watched the racial injustice that was involved," she said. "I want to give back to the community. I want to be part of the solution for the community that helped raise me."

She added that her family is also involved in the community including her husband, David, who is mayor of Bridge City.