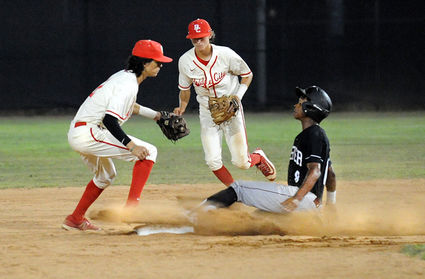 The end came last Friday, May 18, in Nederland, as Jasper took a 8-3 win to complete a best-of-three sweep of the Cardinals.

In that game, Jasper pitcher Colton Womack limited BC batters to three hits and a single fourth-inning run in a complete game.

Cace Skinner doubled home Jackson Tims, who had drawn a two-out walk, to put BC up 1-0 midway through the fourth.

But the Bulldogs evened things in the bottom of the fourth when Leo Escalante slugged a solo homer off Card ace Peyton Havard.

The Bulldogs went up 2-1 in the fifth and scored two more in the sixth off Havard, who surrendered six hits and struck out six.

Logan Hamm and Cameron Yadon joined Skinner in the hit column in Game 1.

Bridge City struck first again Friday as it tried to get the series back to even and set up a decisive third game.

Hamm opened the bottom of the first with a double, was advanced to third by Schuyler Thibodaux’s sacrifice and scored on an RBI grounder by Caleb DuBois.

Jasper tied the game with a run in the second, took the lead with another solo marker in the third, then added two runs in the fourth and another in the fifth off pitchers Jacob Goodman, Justyn Romero and Hamm.

After Yadon’s double and a single by Hamm, Thibodaux made it 5-2 in the bottom of the fifth with another RBI grounder.

It was 8-2 by the next Cardinal at-bat, when Luc Hollier scored the final BC run by singling, taking second on an error, third on a grounder and scoring on a passed ball.

Bridge City picked up seven hits in this game, but Jasper batters racked up a dozen hits.

Hamm, Romero and Yadon had two hits each for the Cards in their season finale.