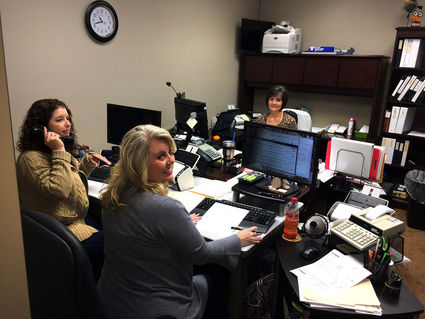 But it hasn’t been business as usual for a number of county employees, who have been displaced for more than nine months.

The 13 members of the District Clerk’s office have been sandwiched elbow-to-elbow in an Adult Probation office space designed for two or three people since last October.

The Precinct 2 Justice of the Peace and constable offices in West Orange, the Precinct 2 commissioners’ office in Mauriceville, the Vidor WIC office and the Vidor sheriff’s substation are all operating out of temporary quarters, said Kurt Guidry, County Maintenance Director.

The holdups have been many.

First there is paperwork and red tape.

Some of the damages are covered by the county’s insurance.

Others are expected to be reimbursed by FEMA or the State of Texas. But bureaucracy at both federal and states levels can’t settle on the requirements or the timetables.

No government reimbursements have come through yet.

And then there’s the matter of contractors’ availability.

Tuesday, for the second time in three weeks, commissioners voted to take funds from the county’s “Contingency Emergency/Disaster” budget to pay for repairing Harvey damage to some county buildings.

These included $1,000 for floor repairs for the Sheriff’s Office dispatch office, $45,000 for the Vidor sub-courthouse, $14,000 for a new roof at the Precinct 3 constable’s office and $12,000 for repairs to the Mosquito Control office.

In all, Guidry has 16 county buildings on his list for Harvey repairs. The completion of the projects funded so far would cover half of those buildings.

And most of those eight won’t be finished for months.

Unlike other offices at the county courthouse, District Clerk Vickie Edgerly opted not to have her staff move back into its spacious office until repairs were 100 percent complete.

“We have too many cabinets and too much equipment to have to move it twice,” she said.

The courthouse and the two clerk’s offices added at the ends of the original structure were mucked out and had their walls replaced and computers moved back in by early in 2018.

But painting still must be done throughout the building.

Some, including at the district clerk office, began this week. It’s expected to take about three weeks.

Then the files and equipment, including computers, must be put back in. The floor will have to be cleaned and waxed.

Prior to Harvey, the district clerk’s office included four computer stations for the public to use to call up land records, criminal records and civil lawsuits.

In its temporary digs, there’s room for only one public computer.

Edgerly says it hasn’t been a problem, though, because most attorneys are using the Internet to e-file their paperwork.

It’s been a great team-building exercise, she said, but added it’s way past time to get back home.

Just like tens of thousands of Orange County residents.