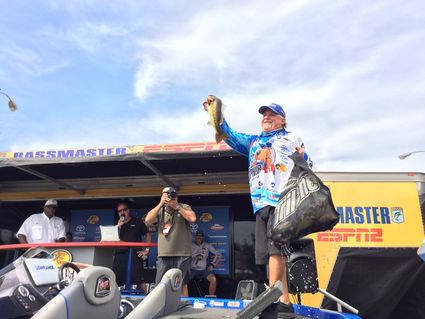 The “NFL of bass fishing” is set to hit Orange next week and it’s bringing top-notch free entertainment with it.

The Bassmasters Elite series will return to the city and the Sabine River for the third time in six years, June 7-10, and is expected to have an economic benefit of $2.5 million to $3 million to Orange County, Commissioner John Gothia said Tuesday.

The bass tournament and the Orange County River Festival were originally set for the first weekend in April, but had to be postponed when heavy rains caused dam releases at Toledo Bend and unsafe water levels on the river.

Musical entertainment had to be rescheduled as well.

“It looks like it’s going to be great weather, and we’ll have everything we’ve had in the past,” Schossow said. That includes, “the kids’ fish tank, the carnival, lots of vendors. So it should be a really good weekend, and the concerts are free.

“Where can you go for free and see John Michael Montgomery -- or Britt Godwin – somebody like that?” Schossow said.

The city’s annual “Art in the Park” event in downtown also moved from early April to next weekend and it will run from 9 a.m. to 3 p.m. Saturday, June 8.

The world’s top bass anglers launch from the City of Orange Boat Launch at 6:30 a.m. and weigh-in their catches at 3 p.m. each of the tourney’s four days.

The county spent $100,000 in hotel-motel occupancy taxes to help bring the tourney in. That’s also the amount in cash prizes that goes to the winner.

Todd Faircloth of Jasper won the first Bassmasters Elite tournament in Orange, in 2013. That event set both week-long and single-day attendance record for events put on by the B.A.S.S. organization.

In 2015, rain limited spectators to just one day but the tournament went on, won by Alabama fisherman Chris Lane.

Last summer, Orange hosted a Bassmasters Open, a second-tier B.A.S.S. event, and had a total turnout of 10,000, organizers said.

“One of the things Orange County is known for is our hospitality,” Gothia said. “We’re looking forward to showing it off again.”