New BC AD wants to keep a good thing going 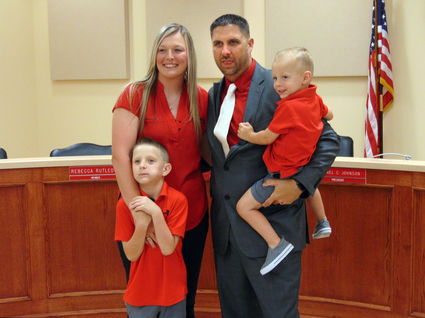 Allen DeShazo, left, was hired May 24 at a special Bridge City ISD Board of Trustees meeting as the new athletic director and head football coach. Here he is pictured with his wife, Jamie, and sons Jaxson, left, and Jadon.

The Bridge City Independent School District Board of Trustees didn’t have to go far to choose their new head football coach and athletic director.

Allen Deshazo, defensive coordinator for the Cardinals, was chosen unanimously as athletic director and head football coach at a special school board meeting Thursday night. Trustee Mark Anderson summed it up by saying the board was very, very excited to have Deshazo for the new post.

Deshazo, likewise, said it was great to be named to the post.

“We live here. I have a relationship with the kids. I want to see through what we’ve started,” he said. “They’re hard working kids. We’re going to put a stamp of our own on things.”

“Sometimes it’s seems I started coaching yesterday; sometimes it seems like a million years ago,” he said.

The Cardinals will continue to run the Slot-T offense. Deshazo added as a defensive guy, he loves that offense. He anticipates replacing a few coaches on staff, but not a major turnover.

“We want to get quality people in there,” he said.

The Cardinals’ district has also been realigned with the addition of teams such as Lumberton and Livingston.

In fact, some other district opponents include Diboll, Anahuac, West Orange-Stark, Jasper and Silsbee.

Deshazo wants his players to be physically and mentally tough and play a brand of hard nose football in order to be successful.

He replaces Dwayne DuBois as head coach and athletic director. DuBois was hired three years ago from Hardin-Jefferson High School and compiled a 17-14 record. He announced in late April he would be leaving Bridge City and returning to HJ.

Deshazo knew he would apply for the head coaching job as soon as DuBois left.

Deshazo said what he will take away from DuBois was his relationship with his players.

“He loved those kids,” Deshazo said.

In addition to DuBois being a positive influence in his career, other coaches who stood out are Jeff Mathews of Vidor, Randy Crouse of LCM and Claude Tarver of Bridge City.

For instance, his wife, Jamie, is head coach of the girls’ track and field team. She’s been successful at that and he wants to see that continue.