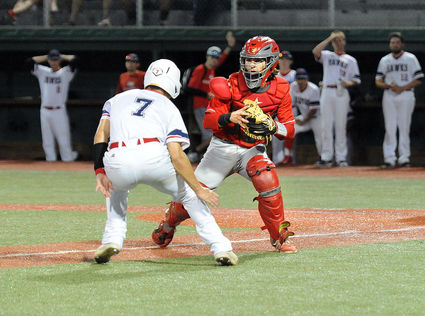 Perhaps no other player locally was asked to shoulder as much of the load for his team as Chad Dallas was this year. The 4 year starter for WOS and Panola signee carried his weight and then some for the young Mustangs. Dallas excelled on both the pitchers mound and at the plate as he led the Mustangs through a rebuilding year. As a true switch hitter Dallas ran through district at .410 clip while allowing only 4 earned runs on the mound.

In a class of very talented local pitchers it would be easy to say that BC sophomore Peyton Havard sits head and shoulders above all. Havard was dominant for the Cardinals all year long as he recorded multiple shutouts and racked up strikeouts at an eye popping clip. Havard established himself as the ace of a deep and talented Cardinal staff and was a key factor in BC’s playoff run.

One of the most dangerous hitters in the area resides in BC and that would be sophomore Logan Hamm. With a great combination of speed and power Hamm wreaked havoc on opposing pitchers, especially in district play when it counted most. Hamm’s batting average in district hovered around .500 while producing runs with both his bat and his speed.

Every good team is built on defense and for Bridge City that all starts behind plate with All State catcher Thibodaux. For 4 years BC has had the luxury of having one of the best catchers in the state handle their pitching staff and control the oppositions run game which Thibodaux did extremely well. The 2018 campaign saw Thibodaux continue his stellar play behind the plate as the anchor of the BC defense.

2018 saw a new face show up and make some great contributions to the LCM baseball program. Freshman Anthony Bandiero in his first year as a varsity player made his presence felt both on defense and at the plate. Bandiero was a consistent performer for the Bears and has a bright future ahead.

Consistency is the hallmark of a great program and Chad Landry has done exactly that since becoming the skipper at BC. Once again Landry captured a district title and made another good playoff run while balancing a team that seemed to be heavy on underclassmen. During the 2018 season Coach Landry eclipsed the 300 career win milestone and looks to improve on that mark next season.