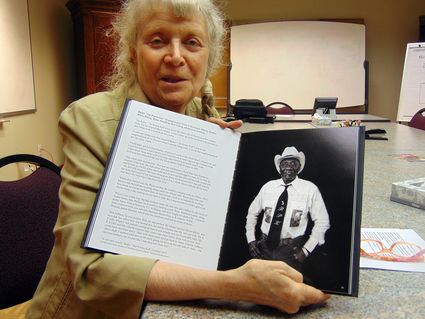 CUTLINE: Sarah Boehme, curator for the Stark Museum of Art, in Orange, looks at the book, "Portraits from Cowboys of Color: Photographs by Don Russell." This exhibit, along with "Cowboys Legends and Life," will be on display at the museum from June 16 through Sept. 29.

Sarah Boehme, curator for the Stark Museum of Art, in Orange, believes a portion of Western history has been ignored.

"There's very few African American art ," she said. "Estimates are one-quarter of the cowboys were African American. They were ex-slaves coming West for jobs as cattle raisers. They worked with animals on the plantations and knew how to do it."

For instance, Boehme was looking for some art in the museum of African American cowboys to also display. She discovered, however, she was hard pressed to find any. The one she did find was a chalk drawing of Bob Lemons — a Texas Mustanger who wrangled wild horses.

Consequently, the museum will be hosting a special exhibit, two to be precise — "Portraits from Cowboys of Color: Photographs by Don Russell" and "Cowboy Legends and Life." The exhibits start June 16 and run through to Sept. 29.

The Russell exhibit is based on a book he published. He spent two years taking photographs of cowboys and cowgirls at predominately African American organized rodeos. He also took pictures of other people of color. In addition, he interviewed his subjects and included captions with the photos. He was born in Kentucky, but he now calls Texas home.

The book "Cowboys of Color" is available from standard book outlets.

She said he went to rodeos and he was entranced by the visual images.

"This is his only Western project," Boehme said. "He's an outsider looking in at another culture. He photographs the subjects and he communicates important stories and text. The series has great depth. They feed off of each other."

A press release read: "I'm not black. I'm not a cowboy," Russell wrote. "These photographs are of real people. They have real lives with real joys and sorrows. The intent of this portfolio is to make visible the modern black cowboy."

He further stated few realize there is a black cowboy culture and history.

"The formal portraits taken at the Cowboys of Color Rodeos give us a window into their lives and personalities while they are pursuing their passion of the cowboy and ranching lifestyle," he wrote.

In addition to Lemons, some other famous cowboys are Nate Love and Bill Pickett who was well known for bulldogging in rodeos. Another is Myrtis Dightman from Crockett. He was the first African American to reach the national finals in rodeo.

As much of society was at the time, rodeos were segregated and black cowboys had no opportunities to ride in them. So, African Americans formed their own rodeos. Boehme said rodeos are almost like a family for the cowboys and cowgirls.

"It will be a revelation for a lot of people. We're excited to offer these opportunities to address Western history," she said.

The exhibit presents the theme of the Cowboy as an icon for America, according to a press release. This exhibition explores the imagery of the cowboy and cowgirl in American Western art. It will present both the idealization and the working life of men and women of the West. Paintings, sculptures, drawings, rare books and photographs from the collections of the Stark Museum of Art give a survey from the late

nineteenth century through the art of today.

Artists include: Frederic Remington, Charles Marion Russell, William Herbert Dunton, Frank Tenney Johnson and others. The exhibition will include new acquisitions for the collections including photographs by Richard S. Buswell and Bonnie Schiffman.

Boehme added with the exhibitions concluding on Sept. 29, school groups will still have enough time to book tours in early September when the school year resumes. There will also be a family day in September to be announced.