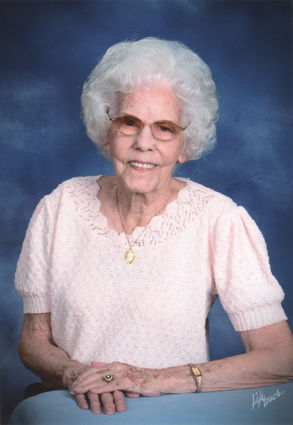 Ruth Annie Polley passed away peacefully at her home in West Orange on June 5, 2018. Funeral services will be 11:00 AM on Friday June 8, 2018 at First Baptist Church in Orange. Visitation will be at the same location beginning at 9:00. Officiating will be Reverend Barry Bradley of First Baptist. Burial will follow at Hillcrest Memorial Gardens near Bridge City.

Ruth was born on December 28, 1924 near Kaplan, LA to Emanuel and Annie (Harper) Foreman. Following the death of Ruth’s mother in 1935, the family moved to Abbeville, where Ruth graduated from high school in 1942. In the same year, Ruth moved to Orange, TX. There, she worked at Prince’s grocery store, where she met Chester Delton Polley, whom she married on May 22, 1943. For the next twenty-four years, Ruth was a home maker and served in various capacities in the West Orange PTA, including multiple terms as president.

After her daughter Verna Jewell graduated from college, Ruth enrolled in LVN training in 1967 at Orange Memorial (later Baptist Hospital - Orange) where she began her second career, eventually going back to school at Lamar University to become a registered nurse. She worked as an intensive care nurse until her retirement from BHO in 1997 at age 72.

Following the death of her beloved husband Chester in 1992, Ruth lived independently in her home until the last few months of her life. She was an active member of First Baptist Church in Orange and a regular volunteer there until her final illness. To know her was to be inspired by her strength, dignity, and self-sacrifice. She will be sorely missed.

Ruth was preceded in death by her parents; her husband; and siblings Harold, Bill, Violet (Sis), Edna, Lena, Thelma, and Clifford (Toter). She is survived by daughters Verna Jewell Davidson (and Leon Hankins) and Pat Lund (and Rodney); grandchildren Matthew and Gregory Davidson, Randy Spurlock, Pam Wilson, and Ted Spurlock; as well as numerous cousins, nieces, nephews, and cherished friends who may as well be family. The family wishes to express gratitude to the staff at St. Elizabeth Hospital in Beaumont, the Meadows Nursing Home, and Southeast Texas Hospice for the care given in Ruth’s final months.