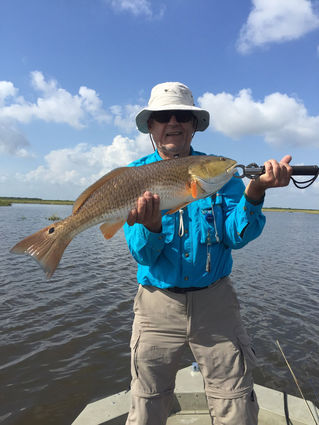 Photo: Redfish don’t mind the heat so don’t be afraid to chase them throughout the day.

It’s no secret that Texas fishermen worship the speckled trout, anglers will go

define their angling career. The amount of print that is dedicated to the trout

the redfish and I have no clue why that is, of all the people I have had the

redfish. As a matter of fact most people get really fired up when a redfish

strikes, especially on a top water plug because that is chaos in action.

redfish, speckled trout never came close to gathering this much attention or for

that matter this much money. The redfish is easily the best candidate for

tournaments, the red is much tougher than speckled trout so releasing fish after

a weigh in is much easier and that makes anti tournament crowd happy. Speaking

of tournaments and crowds, check out the leader board of the some of the redfish

trout under the birds or chasing shrimp. From time to time we all end up with high

expectations of trout and the redfish gang up instead. Everybody targeting easy

behind. I have seen anglers leave birds working over speckled trout to chase

redfish blowing holes in schools of shad, I can’t blame them either. To see a

have for speckled trout.

bruisers, they can be found almost anywhere in our bay system and way up the

rivers in fresh water as well. Redfish can be targeted on the flats, in the

marsh, in deep water near the channels, or out in the open water of the lake.

about what they eat and that plays into every angler’s hands. A favorite method

Carolina rig, this technique works good especially if the wind is up and the

lake gets to be off limits. To catch redfish like this you need some tide flow

and some sort of structure, a point or flat adjacent to the deeper water is

textbook. Another way to catch these hard fighting fish is to sight cast to them

as they hunt for food in the shallows. Areas like Keith Lake and Bessie Heights

are excellent places to spot and stalk tailing redfish, the opportunity to see

of the biggest thrills in fishing.

schooling in the open lake, when this happens all you basically need to do is be

redfish will do the rest. Top water, soft plastic, or the Orange phone book, it

will flat out destroy your offering. One word of advice, when you come upon this

a fish and get back into the action. It’s also easier to unhook your fishing

buddy if the chaos gets too great, and believe me the chaos will be great.

in the lake so be on the lookout, birds sitting on the water, big slicks, or

just really nervous water could be your key to some non stop action. Also

around. Many times the fish will school on the surface for a while and then they

will lose the bait, the shad or shrimp will bust up and the school breaks up as

well. At this point many anglers will leave the area; this is a mistake because

these fish will come back up on top if you just be patient. Hopefully the

activity will get cranked up soon and turn into a daily pattern, I know plenty

of speckled trout lovers who are anxiously awaiting the return of the redfish.