Face-licking dog ‘lifesaver’ for BC couple 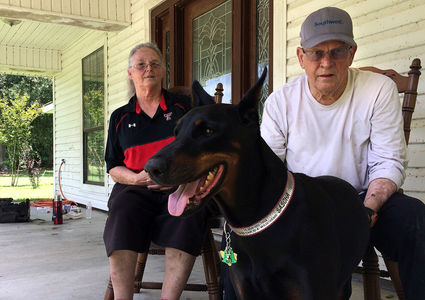 Sascha, the Sterlings’ Doberman Pinscher, woke the couple after a short-circuiting dishwasher touched off a kitchen fire and sent deadly smoke quickly throughout the custom-built home.

The couple were able to escape out their bedroom window without injury and firefighters quickly doused the fire before flames spread throughout the home, which was, nonetheless, left full of soot and standing water.

“It was a horrific thing,” Thelma said of the scene she woke up to at 4 a.m. “Sascha is our lifesaver.”

The 74-pound dog shares a kingsize bed with the couple and usually they all sleep in until at least 6 a.m., Glenn Sterling said.

“When I woke up, it was pitch black. I turned on the light by the bed and there was white smoke almost all the way down to the bed.

“I woke up my wife and all three of us went right out the bedroom window.”

“They had great response time,” said Thelma, 70, who retired from Motiva. “If it hadn’t been for them, we’d have lost our house.”

“There were 10 to 15 firemen here within minutes,” said Glenn, 72, a BASF retiree. “They got here and they went to fighting fire.”

“We can never thank them enough,” Thelma said.

The Sterlings are Nederland natives who moved into their home in Bridge City 30 years ago.

While this was their first fire, this will cause their third home makeover after Hurricanes Rita in 2005 and Ike in 2008 wrecked the house.

Ike’s storm surge in 2008 pushed nine feet of water into their house and ruined everything they owned, including three vehicles.

“One thing we’ve learned since we’ve been here is you can recover from anything,” Glenn Sterling said.

He was diagnosed with non-Hodgkins lymphoma in 2006 and underwent two years of chemotherapy before a life-saving stem cell transplant in 2008.

In fact, he was at M.D. Anderson Hospital in Houston when Hurricane Ike did its worst.

“He used to be on me for being a pack rat,” Thelma Sterling said. “He was at M.D. Anderson and I had to tell him Ike took everything but the four changes of clothes at the hospital.”

Sascha joined the family in 2011, the offspring of two grand champion Dobermans.

Thelma made it clear Sascha was not acquired for protection, or to be a show dog.

“We had just retired. She’s our baby. If she died, it wouldn’t hurt us any less than if our son died.”

The couple stays active by taking Sascha out.

She runs the woods that surround their home. She goes with Glenn and Thelma to feed the ducks at Babe Zaharias Golf Club.

“We take her swimming. She’s just like a member of the family,” Thelma said.

And that includes meals.

Glenn gets up first in the morning and goes to Sonic for breakfast, Thelma said. He brings back a breakfast sandwich for Sascha, cutting it in half before feeding her.

“She eats everything Dad [Glenn] eats,” Thelma says. “If it’s a tomato and lettuce salad, she’ll eat it. She’s a multi-cultural dog. She likes Italian food, Mexican food, you name it.

“If Dad goes to Dairy Queen, he’ll get her a cone.”

Glenn Sterling said the biggest lesson he learned from Monday’s fire was the importance of a smoke detector in the bedroom.

“We have a smoke detector and it was going off, but we heard nothing because it was in the kitchen, on the other side of a closed door,” he said.

“You need a smoke detector in your bedroom.”