School's out, be safe 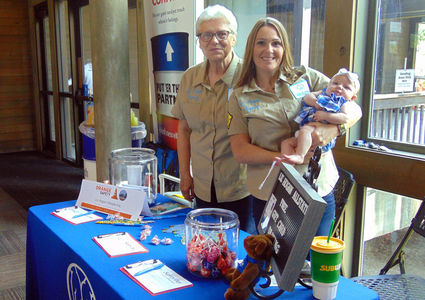 In addition to first responders, other vendors such as representatives with Liz Hogan's Allstate Insurance Agency attended Orange Means Safety on June 8 at Texas Travel Information Center in Orange. The purpose of the event is to keep everyone safe, particularly during the summer with children out of school.

Safety is something that should ever be taken for granted.

The Texas Department of Transportation is trying to keep the public safer with the ninth annual Orange Means Safety event held on June 8 at the Texas Travel Information Center on Interstate 10 in Orange. The emphasis was on safety and on having fun.

Sarah Dupre, public information officer for TxDOT, said the event is the perfect opportunity to teach safety, particularly with children out of school and people going on summer vacations.

"We want people to drive safely and to be safe over the summer," she said. "The travel information center reaches out to drivers and encourages them to buckle up, never drink and drive and don't use your cellphone while driving. Also, to keep Texas beautiful and don't litter.

"Be present when you're driving — don't be fatigued. The center is a place you can stop at when you're tired, walk on the boardwalk or get something to eat."

In addition to TxDOT, there were other informational booths such as Texas Parks & Wildlife rangers, the American Red Cross, the Port Arthur Convention and Visitors Bureau, Shangri La Botanical Gardens, the Orange Police Department, the Orange Fire Department, the U.S. Coast Guard, among others.

For instance, the TP& W ranger gave a demonstration on animals native to this area. At another table there were snake displays local to the region.