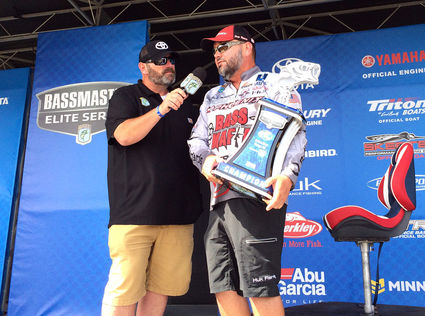 Cutline: Greg Hackney, right, said he had some big bites on some short runs to win the 2018 Bassmaster Elite Sabine River tournament, a four-day event in Orange that ended Sunday, June 10.

The City of Orange and the 25,000 or so who made it out to the Orange Boat Ramp last week were the big winners of the 2018 Bass Pro Shops Bassmaster Elite fishing tournament.

But last Thursday through Saturday, June 5-7, it was people like Butch and Diane English of Bridge City and Allen and Jan Mosley of Vidor who were reeling in the good times.

This was the fourth time in six years for the Sabine River to host a Bassmaster event, three of them $100,000 Bassmaster Elite tourneys.

“Fishing, to me, is the best thing families can do together,” Diane English said.

Butch English was at the Orange Boat Ramp for the weigh-ins on three of the four days.

“I went out and watched them pre-fish for three days,” he said.

And last Tuesday he learned a new lesson about the pro anglers.

“The guys who do this are really good guys,” English said. “I was broke down Tuesday in Taylor’s Bayou and three of these professionals stopped what they were doing and offered to tow me in.

“That tells me what kind of guys they are.”

To excel in fishing on the Sabine is another indicator.

The differences in fishing on rivers and the BASS anglers usual domain, lakes, is great.

“You’ve got to be good. You’ve got to adjust,” Gothia said. “A river’s so much different than fishing a lake, because the fish move so much.”

New tournament rules limited the fishing to Texas waters, but that didn’t keep the guys with the biggest, fastest boats from making long trips into Jefferson County, or even Galveston.

But runnerup Gerald Swindle, who weighed a Sunday-best bag of 14 pounds, 13 ounces to finish at 43 pounds, 11 ounces, said he used only two gallons of fuel on his final day.

Hackney said he burned only 11.6 gallons in four days.

“I had a lot of bites here close,” Hackney said. “I didn’t think I could win close, but I got some big bites this week.”

Swindle, an Alabama native and colorful speaker, said, “You gotta fish slow. I’ve worn a hole in my pants scratching my rear figuring it out between pops.”

Alan Mosley saw much of the tournament from up close. He paid $150 and spent three days on the water, as a marshal.

“It was my first time to do it. It was pretty interesting,” he said.

The crowds of spectators dealt with mid-day rains, and even a lightning storm Saturday evening.

“The rain kind of hurt us a little bit but Mother Nature’s Mother Nature,” Gothia said. “Past that, we had a great attendance for everything we had.

“Saturday, we had a downpour, and some lightning. We were waiting for the [John Michael Montgomery] concert to start, and we got a little concerned. But we probably had 8,000 people here for the concert.”

The fishing fans were big winners.

“We’re a community that just enjoys fishing,” Jan Mosley said. “We just enjoy community, and we always come out for a good cause.”