Wilbur a well deserved all star 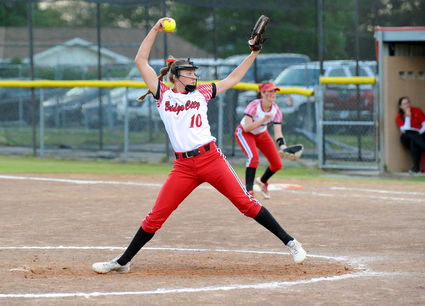 Kassidy Wilbur, a recent graduate from Bridge City High School, was named a Texas Girls Coach Association all start last Saturday. She will attend SFASU to play softball and major in kineseology.

Schuyler Thibodaux, Bridge City baseball standout, isn't the only Cardinal named as a state all star.

Joining him is recent graduate, Kassidy Wilbur, a Bridge City standout in softball.

Wilbur said she discovered she made the Texas Girls Coach Association as an all star last Saturday. She found out she earned the honor after a team mate's father told her.

"I was excited," she said. "I knew my coach (Kayla Gallardo) nominated me the last two years."

Gallardo said over Wilbur's four years at Bridge City she hit 36 home runs and she had 1,248 strikeouts.

The Lady Cardinals made the playoffs this season, losing out to eventual state champions, the Liberty Lady Panthers.

"She should had gotten this (all star selection) last year. It's well deserved. She will definitely be missed," Gallardo said. "She's one of the best kids I've coached. Her goal was to play college ball and she'll do great things at SFA."

Wilbur was named to another all star squad as well in which she'll play — the Southeast Texas Coaches Association all star game sponsored by Christus Health Systems at 6 p.m., June 13 in Crosby.

She started playing softball in T-ball at age 6. She began pitching at 9. Of all her outstanding seasons in high school, Wilbur believes her junior year was her best for playing as a team and individually.

"We bonded really well. We started to trust each other more because we had a new outfield to get used to," she said.

In addition to pitching, Wilbur plays first base and the outfield on her select team.

She earned a scholarship to Stephen F. Austin State University. She'll leave in August to study kinesiology and go the physical therapy route after graduation. In the meantime, Wilbur has been practicing, working out and playing in tournaments over the summer.