A new name for a new field 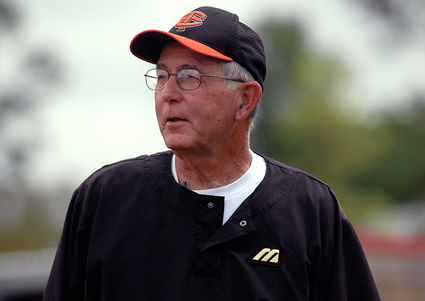 There will be a new name for a brand new ball field.

Young was inducted into the Texas High School Baseball Coaches Association Hall of Fame in 2008.

Former Cardinal baseball players from 1967 until as recent as last season participated in the alumni game and home run derby. The alumni displayed and mounted a sign honoring Young on the left field fence recognizing the former Bridge City coach.

Young racked up nearly 700 career wins as a high school baseball coach. He took over the Bridge City baseball program in 1967 and led the Cardinals to the final round of the UIL State Baseball Championships in 1992 assisted by Coach Charles Miller. Young moved on to coach for Texas City High School reaching the state finals in 2007.

Also related to the baseball field, the board approved going with a synthetic turf for the infield with a TifTuf hybrid grass that will be sand chopped underneath the surface.

Representatives with Sports Field Solutions gave a presentation to the board. They said they have built more than 1,0000 fields in Texas. There’s an eight-year warranty on the synthetic turf and it also comes with replacement panels.

With the synthetic field, the field can drain in 30 minutes after a 10-inch rainfall. Native soil won’t drain as quickly.

The fence at the baseball field will be kept.

In other school district business, the board listened to a demographic study by Trent Smith of Templeton Demographics of Fort Worth.

He said job growth is currently flat in the Beaumont-Port Arthur metro area, but there are projects on the horizon such as Kinder Morgan’s $1.7 billion pipeline from Corpus Christi to Beaumont and from the Permian Basin to Houston, Motiva’s Port Arthur Refinery possible expansion with a final decision to be made in 2019 and Exxon-Mobil Refinery in Beaumont’s expansion starting in 2019. Furthermore, the unemployment rate is down .5 percent as the area continues to recover from the drop in the energy industry.

Hurricane Harvey brought in 59 inches of rain in Bridge City, damaged 800 homes and it had an effect on the economy.

Texas enrollment trends reveal metro areas are gaining children while rural areas are losing them. Bridge City is no exception to the rule. The state is seeing growth in the triangle between the Dallas-Fort Worth Metroplex, Houston and San Antonio.

There has been a significant drop in children Kindergarten aged statewide and locally. Smith speculates it’s because of people putting off having children during the Great Recession and Millennials. Waiting to have children.

Bridge City is the fourth fastest growing in the Region 5 area of Southeast Texas with a 7.9 percent growth.

There are 330 more annual home sales, 62 more than last year, nine percent were new homes. Foreclosure sales in the district declined 88 percent since 2010 and new home sales have steadily increased since 2015.

Since BCISD is a closed district, reported transfers are flat.