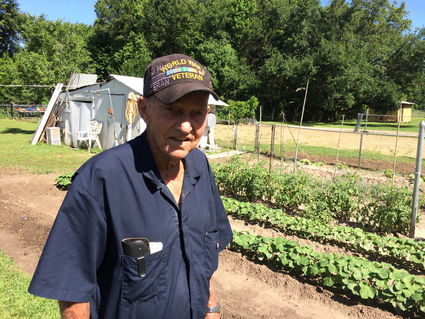 Orangefield’s Levan Myers has two sets of memories from the nearly two and a half years he spent overseas in a U.S. Army uniform during World War II.

The 95-year-old retired oilfield worker prefers to reminisce about the time he spent in the Special Services in 1943 and 1944.

“I played fiddle in the biggest auditorium they had in Paris, France,” he boasts.

He was transferred to an infantry unit in 1944 that was in France before the Allies’ D-Day invasion and he was in the group of Americans that crossed the Rhine River to link up with the Russians at the end of the war.

The horrors of war – which included several German concentration camps – he doesn’t talk about.

“There’s a lot I don’t talk about,” Myers said. “That’s between me and the Good Lord.”

Myers (his first name is pronounced LEE-van) went from running projectors in a Port Arthur movie house in 1942 to entertaining the troops in Northern Africa and Italy in 1943 as the U.S. and its Allies fought their way from Africa up the boot of Italy

Newly married to his school sweetheart, Juanita, when he was inducted into the service in December of 1942 at Fort Sam Houston in San Antonio, Myers was classified as a theatrical technician in the 20th Special Service Company.

The Army Special Services Division, created in 1940, was the entertainment branch of the U.S. military.

Besides running movie projectors, he would perform in stage shows.

He played guitar, fiddle, accordion and harmonica. Myers, listed at 5-foot-5 and 124 pounds when he enlisted, was also an acrobat.

“I was the lightest one in the troupe, and they threw me. One of them could throw me 14 feet,” he said.

And, of course, he was a virtuoso singer.

“I had to be good. Everybody sung,” Myers said. “Even the captain.”

Evelyn Toney, Myers’ daughter, brags that “Dad was a stand-in for Harry Choates.”

Choates, a native of Louisiana who lived in Port Arthur for a decade or so, is sometimes recognized as “The Godfather of Cajun Music.” His biggest hit was “Jole Blon,” the so-called “Cajun National Anthem.”

Myers said he made it up the boot to Rome, then 40 miles north before being recalled south to Naples, where he was transferred to the infantry.

“We spent most of our time in Italy just walking through,” he said. “There wasn’t too much to worry about.”

The soldiers traveled by ship to Marseille, France, from where began the long push to end the war.

“All I did was what I could do, whatever I was told to do,” he said of his time as a rifleman. “I defended myself. I don’t thinkI did anything I shouldn’t have done.

“The Gestapo kids were the only ones we had to worry about.”

He told of standing along a roadway and watching a seemingly endless line of beaten German regulars discard their guns in a pile and surrender.

After about six months of post-war service in Europe, including a couple of months in Paris, Myers came home “and went straight to work.”

That include shipping out with Texas Co., which later became Texaco. He did electrical work for Sabine Towing and eventually settled down with a job working for Paul Cormier in Orangefield.

“I ran rigs for them for about 20 years,” he said. “Then one day, I decided it was time to quit working and I retired.”

Having outlived a pair of wives, Myers spends a lot of time with his daughter. And in his garden.