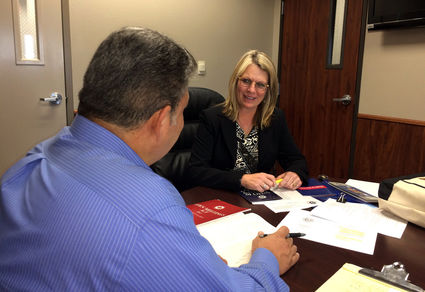 Dean Crooks may or may not have been surprised April 24 when he was named on a second Commissioners’ Court vote to start his term as Orange County Judge seven months early.

But thanks to the Texas Association of Counties, he’s becoming more and more prepared.

Judge Susan Redford, former county judge of Ector County in west Texas, was in Orange recently to help Crooks catch up on the ins and outs of the job.

Redford is working with TAC as manager of its judicial program, which is designed to help new judges who are appointed between election cycles.

“Part of my job with TAC is to help them with the office, with their required judicial training hours,” she said. “I spend some time with them answering their questions, letting them learn where to find things.

“I think that’s the greatest challenge whenever you come into this position and you’re not from the county [government] world or the judicial world, is just to know where you can go for answers.

“And that’s what Texas Association of Counties is here for.”

TAC offers training and resources for all elected county officials. But that training generally starts the first of odd-numbered years, when newly elected officials take over.

Crooks knocked off incumbent Stephen Brint Carlton in the Republican primary in March and faces no opponent in the November general election. When Carlton resigned early, in April, Crooks, a retired police officer, was ready and willing to get an early start.

“This is actually kind of wonderful,” Crooks said of the help from TAC.

“Most jobs you enter, you hit the job and you’ve got to figure things out. This job’s a lot like that, too.

“But having Judge Redford come in, this is a tremendous resource. It’s something you can’t put a price tag on, and they’re not charging me for it anyway.”

Redford was an attorney in private practice before stints in the Odessa courthouse as assistant county attorney and as prosecutor for the Ector County District Attorney.

Crooks is the first county judge Redford has worked with coming with a police department background.

“In my two years with TAC, I have worked with newly appointed judges that were morticians, crop dusters, former justices of the peace, attorneys, businessmen, and next week I’ll working with one who is a beautician,” Redford said.

“So you see all walks of life.”

Crooks said his first meeting with Redford didn’t cover a lot of details.

“Today, we’re keeping it mostly general,” he said. “There’s more [to learn] than we can pile into a day or two, but she’s also giving me ways to contact her and TAC so I can get questions answered in the future.

“This is one of the most useful tools that any newly

elected person for a county position could have.”