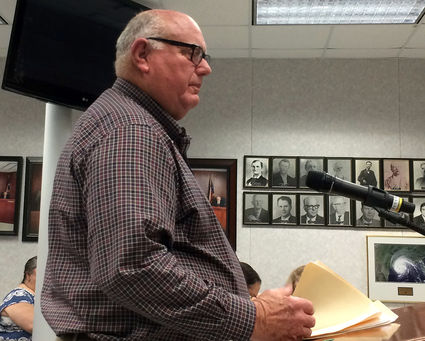 Cutline: Precinct 2 Justice of the Peace Derry Dunn successfully pushed through repairs on precinct offices that have been abandoned since last summer’s flood.

Orange County Commissioners went back and forth for more than half an hour Tuesday before deciding to use $104,000 of insurance proceeds to repair the 30-year-old Justice of the Peace Precinct 2 building.

The decision makers also decided to take over management of the county airport after Sabine Aviation terminated its operations contract.

They also canceled the county’s contract for janitorial services in its buildings.

At Precinct 2, JP Derry Dunn, Constable David Cagle and three clerical and administrative employees have been out of their Edgar Brown Drive office since Tropical Storm Harvey dumped record rains in late August of last year.

Dunn and his Precinct 2 staffers have been working out of the County Records Management office at the County Airport, across the road from the Precinct 3 offices.

Cagle has been working out of his car, Dunn said.

“I say we move forward with what we’ve got. We’ve been kicking this down the road for nine months,” Commissioner Johnny Trahan said.

The motion passed by a 4-1 vote, with Precinct 2 Commissioner Barry Burton dissenting.

“I’m very much opposed to putting a $100,000 band-aid on a building we’ve all agreed has seen its better days,” Burton said.

The Precinct 2 commissioner says the county can get a temporary trailer from FEMA for free and put the insurance money with some future grant money to build a completely new JP building.

But Dunn, who sat through a 90-minute commissioners’ court meeting a week ago where this measure was tabled, argued that it was a matter of employee safety that was the main issue.

He pointed out that his building – which received up to four feet of water from Harvey – had bullet-proof walls and bullet-proof glass to protect staffers.

“It scares the hell out of us every now and then when people come in and they’re mad at us as if we wrote the ticket,” he said.

Dunn said, for him, it all came down to whether repair or replacement was faster.

A construction supervisor with Spaw Glass, the county’s Harvey-repair contractor, said the repairs could be completed by the end of July.

County Maintenance Director Kurt Guidry said he’d have to check with FEMA’s trailer manufacturer to see if they could add bullet-proofing and how long it would take.

“Judge Dunn, can you wait one more week [for a decision?],” Commissioner John Gothia asked before the vote.

Commissioners discussed but refused to take action on four projects – three for new roofs on pavilions at Claiborne West Park and the other for a new floor for the Sheriff’s Office because they felt Spaw Glass’ price was too high.

They tasked Purchasing Director Connie Cassidy to get more quotes for the jobs.

The county did pay $666,216 in bills. It also agreed to pay $364,852 for three months of service from Wendorf, Beward and Partners, the county’s FEMA reimbursement grants consultants.

Sheriff Keith Merritt was authorized to renew an agreement with Lamar State College-Orange Department of Nursing to allow students to work their clinical hours at the County Jail.