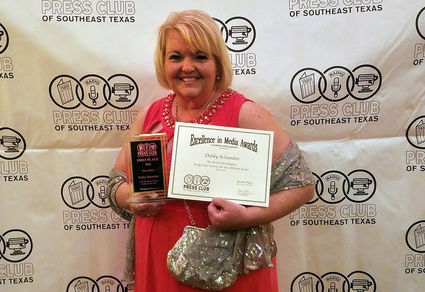 Friday evening was full of mixed emotions as Reporter Debby Schamber took home two awards from the Press Club of Southeast Texas for her work at the Record Newspapers.

Schamber took home a first place for her story, "Fate of Michael Davis in the hands of the jury."

This report was on Michael Davis who faced intoxication manslaughter charges after he ran down 77 -year-old Jerry Campbell as he worked to clean the ditches in front of his home in May 2016.

As a result, Davis was sentenced to the maximum amount the law allows of 20 years.

The close knit Campbell family has embraced Schamber as one of their own which is why she was filled with mixed emotions.

"I love this family and wish we had met under better circumstances, " Schamber said.

Schamber also took home a second place award for her story on Jimmy Scales who was tragically killed in July 2017.

Her story, "Bridge City mourns the loss of Jimmy Scales," tells the story of his dedication to his family and the community.

"This was a difficult story to write," she said." These people are my friends and my hearts breaks for them and I appreciate them trusting me to write this story."

Schamber has worked in the newspaper business since 2004. She is dedicated to her work and knows the importance of the victims and their families when writing a story.

Schamber has won numerous awards with the Press Club of Southeast Texas and has also the prestigious and highly coveted award from the Associated Press. In addition, she has won Print Media Journalist of the Year for the State of Texas during her career.

"I could not do this without the support of my boys, Jason, Joshua and Jordan and of course my husband Curtis Herrington," she said. "I am also grateful for the support of the Record staff for their help in putting my story on the pages."