Both stores have started remodeling to modernize the interior and exterior and keep up with the times. K-Dan's opened for business in 1999 while Danny's opened decades earlier. The remodeling at K-Dan's, however, is on a larger scale than their sister store.

Co-Owner Dan Brack, of K-Dan's, has been in the grocery business since he was a kid. He said their store will have new dairy cases and new frozen food cases, all new grocery shelving, new checkout counters with scanning cash registers, the front end will be done with new gasoline pumps and new fountain drink dispensers on new granite countertops. Also, some flooring will be replaced in the store. New gas pumps outside.

"It's a total facelift of the store," Dan said. "We're remodeling now because of the new tax incentives out there to depreciate the stuff instantly. And we're remodeling for the community because it's growing and the business is growing. It's time to upgrade to keep up. We're absolutely here to stay."

The store has wanted to remodel for a year and a half. They started for real when Dan returned to the family business in January.

"We're being patient to get it right. We're hoping to finish sometime in mid-July and have a grand reopening in August," he said. "We're also upgrading the kitchen with new fryers, counters across the front that will be granite countertops. The front end will get a facelift. We've redone the walls. It will be more modern and up to date. Orangefield been good to us. The community supports us well."

Though Orangefield is K-Dan's bread and butter, the store does draw somewhat from the outside area such as Bridge City and Orange. Buses headed for the casinos in Louisiana or the Stark Museum in Orange also visit the deli.

"You can't get anything like this at any local restaurant or place for what we give with the quantity and quality of food. The chicken fried chicken is for $8.95 and the Chicken Pontchartrain for $10.95 on Thursday and Friday," he said.

The deli serves breakfast, lunch and dinner from 6 a.m. - 8 p.m. Monday through Friday, and from 7 a.m. to 8 p.m. Saturdays and Sundays. Dan said Sundays are incredible days for lunches they serve chicken fried chicken and another homestyle kind of meal to go along with it.

The store also has a Facebook page with one-day and two-day ads posted. They're upgrading their website too. For instance, Dan said the store bought three-pounds bags of potatoes that were a "ridiculously cheap price." Customers could buy four bags for $1 and have 12-pounds of potatoes.

"Our prices are competitive with grocery stores in the area. We're more of a large convenient store. Our meat prices are extremely competitive," he said. 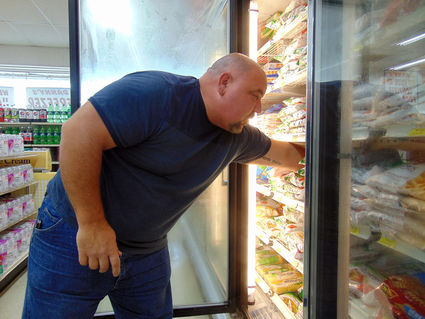 Civic organizations still meet in the dining area and there's also a men's Bible study group that meets there area. Booking the dining area is free of charge, but patrons must call ahead to make reservations.

Meanwhile, Danny's Super Foods in West Orange is also remodeling. Both stores are doing the remodeling themselves.

Darwin Brack first started working at Danny's Super Foods in West Orange in 1974. He doesn't know when the store originally opened, but it was ABC Store before Danny's and he figures it goes back at least to the 1950s. His father, Danny Brack, bought the store from Robert Ramirez in 2002 and named it Danny's again.

"We're the oldest grocery location in Orange County that's still selling groceries," Darwin said. "We're also remodeling. We have new cool boxes and a new checkout stand. "We needed to upgrade and keep up with the times, but we're still like an old country store. We're doing what we can to survive."