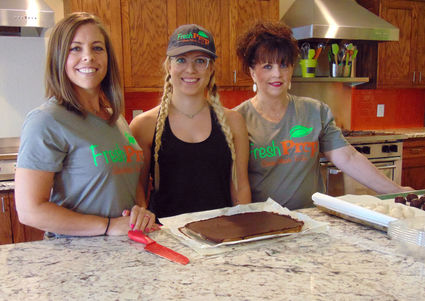 Fresh Prep opened their meal prep service three years ago so people could live and eat healthier. They prepare fresh, clean meals on a weekly basis customers can store in their refrigerators and grab on the go.

Fresh Prep, in Bridge City, simply describes themselves as Clean Meals To Go.

Owner Carrie Richard, and her mother, Manager Beth Hanks, opened the meal prep service three years ago so people could live and eat healthier. They were later joined in the business by Maddison Bouget, operations manager.

They prepare fresh, clean meals on a weekly basis customers can store in their refrigerators and grab on the go, according to their website.

"We use no additives in our food," Richard said. "It's all God made, not manmade ingredients. It's organic, non-GMO (Genetically Modified Organism). GMOs don't process in the body. It about how much you care."

The store is opened from 11 a.m. to 5:30 p.m. Monday through Friday, serving breakfast, lunch and dinner, snacks and sweets. They're open until 7 p.m. on Tuesday.

They also run a special for the elderly and the disabled — people who are homebound and who can no longer cook for themselves — of seven meals for $50.

Peanut butter balls are their number one seller. Richard joked they should be renamed the peanut butter factory. Other popular dishes are jambalaya, Mexican eggs, lemon turkey, enchiladas, lasagna and smoothies.

"We cook regular food, but it's clean," she said. "Clean meaning real food, not with manmade seasonings. We serve no fried foods. Everything is gluten-free and most everything is soy-free. Sauces are made from scratch and homemade."

They also won an award for their chili in a chili cook-off.

Richard added that when she goes grocery shopping, she hand picks everything.

Hanks said if they serve noodles, the noodles will be made from beans.

Richard said she became interested in clean food when she became a CrossFit coach. She estimated she needed to be intelligent about food so she began researching food. She said she discovered how awful some of it was.

Fresh Prep was started in her home. Her days were filled with cooking and taking care of a newborn baby. Now, she has six people to help with the cooking. The store has also been remodeled and expanded.

Hanks attributed their success to God.

"We serve real food here. We started this because we were thinking what the community needs. Eddie Van Huis bought the land where all of this (including Orange County Fitness on FM 1442) got started. We all attend the same church," she said.

The women said there is now ongoing education on television about harmful foods. Hanks said there is a condition named leaked gut syndrome in which bad foods leak out of the gut to organs, leading to diseases.

Hanks gave accounts of an elderly man who wanted to get his numbers down. When he started eating the Fresh Prep food, his numbers came down so much he's no longer on insulin. Fresh Prep doesn't serve bacon and eggs, however they said they would make an exception in his case as a reward.

Hanks had to stay with Richard for two months due to health reasons due to arthritis. She started eating the clean food and her aches and pains were gone. She also lost 15 pounds.

"Why do people's weight go up and down? A lot of us eat for pleasure," Hanks said.

Bouget added that our brains tell us what we want.

Richard said she was diagnosed with a brain tumor three months ago. Doctors told her that her healthy way of life kept the tumor at bay.

"I was suppose to die from this, but I had no inflammation in my body. It's (the tumor) gone," she said.

Hanks said the tumor is a genetic condition Richard was born with. While Richard was out recovering, Bouget stepped in and ran the store. Both Richard and Hanks said Boughet is the creative one who gets things done.

"We wouldn't be running if it wasn't for Maddison," Richard said.

Hanks added many people, such as Van Huis, have helped them to succeed.

"I think this is the only place like this in the area," she said. "More people are learning what food does to the body. They're more aware of what not to eat. We're the fast food generation and we're learning the effects of eating out."