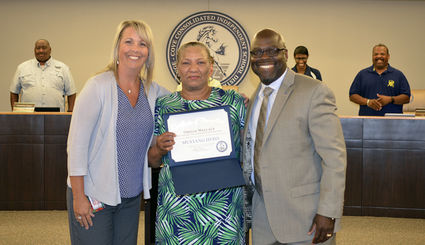 WOCCISD Bus Aide Orelia Wallace was recognized as a Mustang Hero in front of the Board of Trustees for her outstanding service on May 25, 2018 when she used CPR to save the life of child. Executive Director of Student Services Heather Knox presented the recognition at the WOCCISD June meeting of the WOC Board of Trustees.

Knox said, "Tonight we would like to publicly recognize Ms. Orelia Wallace for her true act of heroism. On Friday, May 25, during the morning route for North Early Learning Center, Ms. Wallace was on the bus and noticed a child and mother in a front yard."

The mother was visibly upset and her child was actually going in and out of consciousness. Ms. Wallace immediately exited the bus and started CPR. She continued to administer CPR until an ambulance arrived.

WOCCISD is proud to recognize Ms. Wallace as a Mustang Hero and an amazing member of the WOCCISD Transportation Team!