A different way to play golf 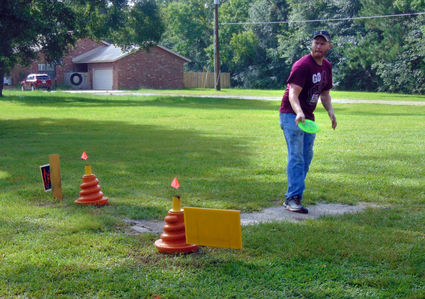 Local disc golfers gathered for the Battle of the Border on June 30 at The Nazz course behind the Church of the Nazarene on MLK Drive in Orange. Disc golfers are trying to grow the sport in the area.

The origins of disc golf started in the 1960s in California, according to the Professional Disc Golf Association website.

In Southeast Texas, disc golfers have been playing for several years. Even Orange has its own course for two years named The Nazz behind the Church of the Nazarene on Martin Luther King Drive. Consequently, the second annual Battle on the Border tournament was held June 30 there, consisting on different divisions of skill sets playing two rounds of 18 holes.

Larry Martin, tournament host and course architect said he got the idea to build a course in Orange four years ago. He completed it in three years with some help.

"It was a lot of trial and error," he said laughing. "I've been playing disc golf for a couple of years. I go to church there. I would pass the church property and see it wasn't being used. I asked the pastor if they wouldn't mind if I used the property. He talked to the church board and they said yes," Martin said.

He added that Rodney Ellis gave him much help in the early stages before he moved and other disc golfers throughout the Golden Triangle helped too.

Martin said at the onset there were nothing but trees out there; "real dense" trees. Those that were greater than an inch and a half in diameter were uprooted. Smaller ones were cut. The larger trees were kept. Then, the grass had to be mowed.

Ideally, it's desirable to have an acre per hole for an 18-hole course.

Even after all of that, Martin said the course still requires much upkeep.

"We have a pretty good and friendly brotherhood that don't mind helping others," he said. "They want to see you grow and to get better."

The tournaments are set up similar to ball golf. There are special tournaments called Ice Bowls that raise money or food for local charitable groups that need help to give back to the community.

In addition to Orange, there are local courses: Klein Park in Beaumont, Pleasure Island in Port Arthur, Claiborne West Park in Vidor, two in Lake Charles, a private course in Ragley, Louisiana, and one in Lumberton. Martin said there's some talk about building one at Tyrrell Park in Beaumont. There was a disc golf course there until Hurricane Rita tore down too many trees in 2005.

"We're working on growing the sport and get it growing," Martin said. "This summer I would like to work with the kids and teach them how to play.

"We had the World Series tournament in1994 in Port Arthur. The winner won a Cadillac. We have two local professionals — Tanner Girouard and Christina Linthicum."