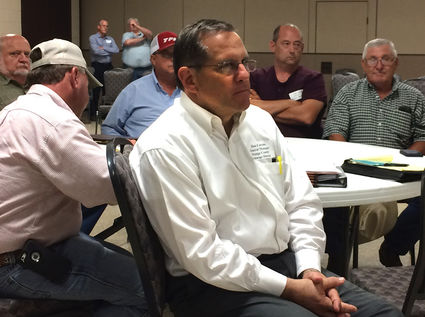 Photo: Don Carona, general manager of the Orange County Drainage District, listens to comments from Orange County Judge Dean Crooks and others at the June 28 drainage workshop at the county convention and Expo Center.

Bessie Heights Marsh outfall into the Neches River and Adams Bayou’s route to the Sabine River were identified as causes of many of the flooding problems in Orange County during two drainage workshops hosted by Commissioners’ Court Thursday, June 28.

About 250 citizens came out to either a morning or night meeting and more than 50 brought questions for a large gathering of governmental officials.

Besides the five members of the commissioners’ court, County Engineer Clark Slacum and Emergency Management Coordinator Joel Ardoin repped for the county.

Mayors and/or city managers of all seven of the cities in the county were on hand for at least one of the two meetings.

“In our county, we face our greatest challenge with infrastructure – more specifically with drainage. We cannot grow or even maintain what we have if we are plagued by constant flooding,” County Judge Dean Crooks said.

“We must come together to pool our resources and strengths to make our community strong again.”

“We don’t have any ditches that are not at 100 percent capacity,” he said. “We are soliciting funds from FEMA not just to repair our ditches but also to improve them.”

He said a ditch that used to extend into the Bessie Heights Marsh that drains much of the west side of the county now dead ends well short of the marsh.

He showed Google Earth maps from 2005 and 2017, noting the big difference was the importing of 1.6 million cubic yards of silt for a federal marsh restoration project after Hurricane Ike in 2008.

“The intentions were good,” Carona said. “That project serves a purpose, it protects from a surge, but that can’t be at the expense of drainage.”

Carona said his crews had measured the elevation of some of the canals at 2.5 feet above that of the marsh waters three weeks ago, and a difference of 3.5 feet following the June 20 “rain event” of 10 inches in a day.

Adams Bayou and Cow Bayou drain water from North Orange to the Sabine River on either end of Chemical Row.

“We are investigating long- and short-term options,” Carona said.

Tom Clary of the Hillbrook Addition north of I-10 near Martin Luther King, says 15 percent of the homes in his neighborhood are being abandoned after last year’s record flooding of Tropical Storm Harvey.

The flooding, he says, is caused by sediment and fallen trees that have reduced Adams Bayou to half its original width and depth.

“Where the channel used to be deep, you can almost walk across it in places,” he said. “Our drainage district knows this, but they only have a $6 million budget.

“They have to get FEMA, HUD or state money. Our drainage isn’t working, but they’ve got to get money to fix it.”

Carona said the drainage district had already applied for funds for a “de-snagging” effort that would go a long way to help the problem.

While more regular maintenance would be a boon, Clary put a lot of his subdivision’s problems on TxDOT for putting 43 pilings under its I-10 bridge and two service road bridges there.

Carona said the Drainage District had applied for grants to buy property near Cow Bayou to build detention ponds.

TxDOT representatives Kenneth Weimers strongly disagreed with property owners in Clary’s neighborhood and in north Vidor who said drainage had been made worse by elevated lengths of interstate 10.

However, Weimers said TxDOT had been installing removable barriers on the interstate in Rose City and Orange to help with drainage.

Another issue repeatedly touched on by homeowners included concerns about repeated flooding at Twin Lakes Estates in Orangefield and the safety of an ongoing construction of a Phase 2 there.

Both Carona and Slacum, the county engineer, said the county was now requiring hydrology studies be performed by builders that showed new construction would have zero impact on flooding.

The Vidor Wal-Mart was built with two detention ponds to have a negative flooding impact, they said.

Both Paula Quebedeaux of Elizabeth Street in Bridge City and Chris Jenkins of Bessie Heights Road said their homes had flooded eight times in the last 20 years and wanted to know about the possibility of buyouts.

Quebedeaux said she’d lived in her home 33 years, while Jenkins had only had his property for a few years. He said the recent June rainfall was the third time in 11 months his home took on water, including June 2017 storms and Harvey in August, 2017.

But Jenkins’ biggest complaint was that the property was available at all after five previous floods.

“I was a first-time homeowner and I admit I overlooked some important stuff,” he said. “But when I applied for permits after Harvey, the person there asked, ‘Why did you buy that house?’

“I want to know why does the county let me buy it?”

At the Tuesday, July 3 meeting of Commissioners’ Court, Nancy Beward of Wendorf Beward & Partners, the county’s FEMA administrator consultant, said she expected $15 million to be available in a buyout program and $17.5 million in a home elevation program.

Ardoin, the county emergency manager coordinator, said the county will hold a meeting at 6 p.m. July 16 at the Expo Center for those among the owners of 355 county homes deemed “substantially damaged.

”We’ll start sending out letters” to the 355, Ardoin said. But he did not limit the meeting to just those.

“Anybody who thinks they may be a candidate for buyout or elevation program, they need to go.”