At 34, Orange’s Clayton Trimm is an old hand at serving others and putting his patriotism to work for his country and community.

Now he’ll be doing it in a different uniform.

Trimm, a 2002 graduate of Little Cypress-Mauriceville High School who spent 10 years in the U.S. Army, has completed the Trooper Training Academy for the Texas Highway Patrol.

He will begin his new job later this month, operating out of Corpus Christi.

“I haven’t been a cop yet, but I know I’ve walked on streets where people hated me a lot more than they could hate any cop,” Trimm said when asked to compare his new job to his last job, where he went on more than 500 combat patrol missions in Iraq and Afghanistan.

“I’m not an adrenaline junkie but I’ve had the mental fortitude to be able to handle a lot of extreme situations.

It’s something I can handle.”

“Our permanent job was destroying IEDs [improvised explosive devises],” Trimm said. “When you’re working with explosives, you’re either going to be right, or it’s going to be somebody else’s problem.

“There’s a consequence to being wrong.”

Clayton is the fourth of Larry and Marie Trimm’s five children.

Trimm said he’d always wanted to work in law enforcement. His first job was as a guard at the Gist State Jail in Beaumont.

“I kind of wanted to be a cop at the time, and that was one way to kind of get your foot in the door,” he said.

Joining the Army was a decision fueled by the chance to make more money and help his young family.

“It was a better paying job, nothing glamorous,” Trimm said. “There was no big patriotic feeling at first, but it grows on you.

“It makes you appreciate being back here more.”

Between overseas duty, Trimm was stationed, along with his family, in Hawaii; Fort Campbell, Kentucky; and Fort Hood, Texas.

“I really enjoyed my time in the military,” he said. “I had a lot of fantastic opportunities.

“The Army is really good about teaching you to do stuff that’s inherently dangerous and making you feel good about it. You don’t get complacent. You just get more confident. You start trusting your instincts.”

He earned a battlefield promotion to staff sergeant.

“I only did two tours in 10 years but with all the trainings I missed half of my 11-year-old’s birthdays. The family is excited I’ll be home.”

Trimm said shifting to the Highway Patrol comes after a two-year process that saw him spend five months in the Trooper Training Academy in Austin.

He was one of 80 to qualify for the June 29 graduation ceremony.

“They do phenomenal training,” Trimm said of the Texas Department of Safety, which contains the Highway Patrol. “I don’t think I had a big adjustment. The biggest thing is law enforcement is more defensive-minded. But their methods are kind of similar.” 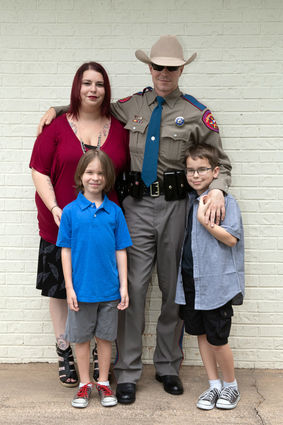 State troopers are primarily tasked with traffic enforcement and crash investigations. But they also do supplemental police work for sheriff and police departments in their jurisdictions.

Trimm will be assigned to a six-month ride-along program with a senior officer when he starts in Corpus Christi.

“Unfortunately, most people’s exposure to law enforcement is when they get caught doing something wrong,” Trimm said.