Cutline: Bridge City's Matt Bryant checks out the armament on a Blackhawk helicopter during a USO trip to Iraq with fellow Atlanta Falcons players and staff in June

As the United States of America celebrates its 242nd birthday, Bridge City native Matt Bryant and a handful of his Atlanta Falcons teammates have a deeper appreciation of the expression “Freedom isn’t free.”

An All-Pro kicker heading into his 17th NFL season, Bryant had previously been on a USO tour of bases in Guam and Hawaii.

Quinn, who guided the Falcons to Super Bowl XL in 2017, has brought former Navy Seals to the Falcons several times to conduct “boot camp” team-building drills.

But Bryant’s first trip the Middle East was “eye-opening,” he said.

“To see with your own eyes what the result of war can look like was an experience,” Bryant said.

“A bad day for me is I miss a kick, I come home to my kids and wife. A bad day for those guys [U.S. military], they come home in a casket with a flag on the top.

“Seeing what I did makes you appreciate it even more.”

Bryant’s group tour was short in days but it touched on many landmarks from the U.S. involvement in Iraq, which began after Iraq invaded Kuwait in 1990.

The Falcons contingent flew first to Kuwait City, Kuwait, jumping-off site for the 1991 Gulf War. From there, they flew by C-130 transport to Baghdad and stayed with Joint Forces Command there.

“In Baghdad, we saw the Ba’ath political house, which was a new building before we dropped three [bombs] down through the roof,” in 2003, during the early days of the Iraq War, Bryant said.

“We also saw the building where they held the trial for Saddam Hussein, and from there, we looked out over the city and saw the Swords of Giza and a couple of mosques.”

After visiting with troops in Baghdad, hanging out and signing autographs, the Falcons traveled next by Chinook helicopter to Qayyah West Airfield, 40 miles south of

The U.S., after having as many as 170,000 troops at a time in Iraq, withdrew forces in 2011. But three years later, after ISIS – the Islamic State In Iraq and Syria – took control of Mosul, Iraq’s second-largest city, the U.S. sent as many as 5,000 troops to help the Iraqis confront the extremists.

Bryant’s group viewed the aftermath of the intense fighting for Mosul from a Blackhawk helicopter.

“It’s complete destruction, to see building after building completely uninhabitable, to see what ISIS did on their way out,” Bryant said.

“They bombed bridges and left behind thousands of IEDs. Those IEDs were meant to maim, not necessarily kill, but take off a hand or a leg.

“Imagine a kid who has nothing to do with anything, and all of a sudden, they’re affected for the rest of their life.”

The Falcons players refer to themselves as a “Brotherhood.”

But, after an overnight stop at a U.S. base in Irbil, east of Mosul, and a trip back to Kuwait, then home, Bryant had a new definition of brotherhood. 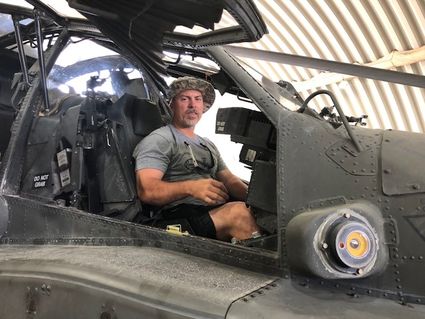 “Just going there and being around those guys, and seeing what it meant for each and every one of them to be in the Army, Marines, Air Force, or Navy, it was important to them,” Bryant said.

“The soldier to the left and right of them was important. It was important to be part of a team, a unit. To see the respect those in the lower ranks gave the higher ranks and how the respect went both ways, was awe-inspiring.

“And that was all the time.”

“When we hear about the brotherhood, we have that concept but that concept in the military is a whole other level.”