A little country in the city

A variety of farmers and craftsmen gathered this Saturday near the community center in Bridge City as they always do during warm weather to sell their wares at the Bridge City Farmer's Market.

Betty Vail, one of the organizers for the market, said there was a petting zoo, "very good" local honey, blueberries and other vendors to name a few for that day.

For instance, Kayla McKinley is a Bridge City resident who has a green thumb. Her business is selling plants and and flowers.

"I'm a plant hoarder. If I don't have it I don't want to get it," McKinley said. "I was brought up by farmers. My grandparents were sharecroppers from Germany. My aunt and mama were always outside. I'm a late-life baby so I was closer to them."

Some of the items she had at her booth were day lilies, hibiscus, passion vine, aloe vera plants, etc.

The farmer's market entered it's second year. McKinley has been with them from the beginning. In addition to her plant booth she's also studying to be a master gardener with Orange County.

"I'm always on my phone Googling about plants or chatting up plants with others," she said. "I like to know stuff and tell people about the plants as much as possible."

McKinley's neighbor at the market, Krystle Pizani, is also a Bridge City resident. She creates and sells all kinds of door signs.

"I have two boys at home. They're 7 and 4. I wanted to do something to pass the time. Something I could own," she said. "I'm self-taught. I went to YouTube to learn how to cut, sand and paint wood. I use a jigsaw and draw a pattern to cut around and sand it down. I can make a sign within two hours."

Pizani is brand new to the market. She added that she will later sell her signs on Facebook. In the meantime, she's seeing how things fare out with the locals.

Across the way is Mama Kay's Homestyle. Kay Rubin travels to Bridge City from Lumberton every Saturday to sell her homemade salsa, marinara sauce, pickles, okra, jams and jellies, etc.

"I make all of my things from scratch. My grandmother was from Arkansas and taught me how to can. My bread and butter pickles are from my own recipe. I make everything from my home. I have three ice chests full of food to process.

"Every time I make it, it comes out a little different. My recipes are in my head."

Rubin said old traditional trades such as canning are becoming more popular again, but many people don't realize the work involved with the process. For instance, she grows all of her fresh produce, and herbs such as basil, rosemary and thyme.

Howard and Ruthie Flowers came in all the way from Honey Island. They sell produce grown by local farmers and the rest of the items sold they grow themselves. Some of those items were: watermelons, tomatoes, icicle pickles purple hull peas and butter beans.

Stephanie Harren, of Bridge City, was on hand selling her 100 percent raw goat milk soap. She also brought some friends with her — a rooster, ducklings and a turtle.

"If I grow it I'll sell it," he said. "I love seeing people buy fresh produce."

One special item Frasier grows and sells is the Texas ebony tree, one of the most expensive woods there is. The tree is now extinct, but Frasier is trying to bring it back.

He said pirates would make ship anchors from the wood because it's so weighty and sturdy. Cowboys used the beans from the Texas ebony tree to make coffee.

The tree is originally from this area. One of Frasier's friends brought him seeds for the tree to grow on his property. They grow one-foot a year to a height of 25-feet with a shade area of 20-feet.

"They're a beautiful tree," Frasier said.

Mike and Fay Ginn have been in the bee business for four years. Mike joked they started the business because they ate so much honey anyway.

"We didn't like buying sugar water at the stores," he said.

He added that their honey is all natural with no chemicals. They also make a creme honey that's like a dessert.

Beekeeping is still a hobby for Mike. He said he has been stung everywhere on his body. Fay, however, said she doesn't get close enough to the bees to get stung.

In addition to the honey, the Ginns also sell bee's wax that can be used as lip balm, face lotion or door grease.

"There's lots of good qualities from bees," she said. 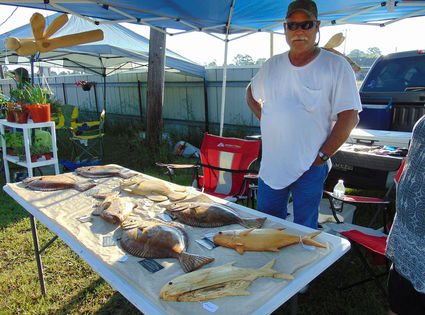 Robert Vail of Robert's Wooden Creations loves fishing so much he now makes his own fish out of wood.

Joyce Hinson came from Evadale. They're situated at the entrance to the market. Joyce said they grown their own produce. She also makes jellies, jams and canned items.

They stayed up all night shelling peas for the farmer's market. In addition to other produce, they have Sugartown watermelons which are always popular.

"Business comes in spurts," she said. "My husband stays busy in the garden. You have to stay with it though the heat drains your energy."

Last but not least, Robert Vail sells Robert's Wooden Creations. He makes one of a kind hand-crafted wildlife creations. For Saturday, he had several kinds of fish he made displayed.