Maybe the next musical superstar may hail from Bridge City, Texas.

The Pinnacle Music Academy, housed inside Good Shepherd Lutheran Church at 945 W. Roundbunch Rd. in Bridge City — though they're not affiliated with the church — opened for business in May. Maybe they'll play a role in that next superstar or someone who just wants to play music as a hobby.

For instance, Kendal Kailo, 8, an incoming Bridge City Intermediate School student, is taking vocal lessons and learning the basics skills — pitch and range, with her voice coach. She would like to sing, act and dance on Broadway some day.

"She's (the voice coach) is great at finding out songs for her to sing," said her mother, Megan Duhon. "She works with her on the technical side of the songs she picked. She loves it."

Kendal has been working on her vocals for a year, singing around the house. She likes programs such as "The Voice" and "American Idol" and decided she wanted to sing.

However, there were no music schools that were near with Mid-County being the closest until Pinnacle opened.

Duhon said the school is "super flexible" with her daughter's schedule.

Kendal said last Thursday's lesson focused on letting in and letting out air. Duhon said she can tell there's a difference in projecting her voice.

"We knew she had a talent and she could expand upon it," Duhon said. "Her dad sings and plays guitar. She's been practicing projection, breathing and scales.

"It's been a great experience and a confidence builder for her. She's getting a wealth of knowledge. She may play piano down the road."

In addition to singing Kendal also likes to dance, bake, and play softball.

​1. Music improves memory. Even when students are playing while following sheet music, students are constantly using memory skills to perform. Memorization is a skill that will serve you for the rest of your life.

Music and sports both help children develop their small motor skills when they are playing.

Students strive to create great work instead of mediocre work. This is a work ethic that can be used in every area of study.

Every day time must be set aside for practice and learning or creating new music. Kids must exercise self discipline to master their instrument.

Student who like music are far more likely in to stay in school, and they achieve success in other subjects.

7. Students have better SAT scores. Studies have shown that students who have a musical education score higher on the SATs.

Some reports indicate the scores are as much as 63 points on the verbal portion and up to 44 points higher on the math portion.

8. Music builds teamwork. It is not just sports that teach children the value of teamwork, music does as well.

Kids who perform in orchestras or bands need to work together for musical performances. They learn the value of working together and build camaraderie and friendships along the way.

9. A strong sense of accomplishment. Learning to master a new piece of music is a difficult but achievable goal.

Even the smallest piece of music leaves a student proud of their accomplishments.

10. Music develops creative thinking. Children with a background in the arts learn to think creatively.

This is a life skill that can help in every aspect of your life, solving problems without visible solutions and the prospect of more than one answer.

11. Music develops a child’s imagination and intellectual curiosity. Teaching children music while they are young helps create a positive attitude towards learning. Children become curious about learning new music and this is adapted to learning other skills as well.

Konner Lebert, another student at BCIS, is learning guitar. He's learning the chords and played "Hallelujah" on Thursday, but he really wants to learn how to play "Thunderstruck" by AC-DC. He also made it into honors choir this year, but he still rather do band than choir. He got his first guitar four years ago. Brooke added that he likes all kinds music.

"I was shy and really nervous (about singing). I wanted to go last. But I made it and I did really good," he said.

His mother, Brooke Lebert, said Konner has really good pitch, he just has to work on singing in front of people. She added that singing at church and in front of his friends helps. Konner said he doesn't have to sing loud, however.

Konner has a friend who plays the drums and believes they could form a band.

"It's fun (at Pinnacle) and it's local. We're two minutes away," she said. "Both of his instructors are really good, nice and patient."

In addition to music, Konner likes to play video games and operating retro musical players such as cassette decks.

Pinnacle's Facebook page reads they have an experienced staff at the academy: "Our music teachers' experience range from the prestigious Berklee School of Music to professional performance experience and making it past the celebrity judges on American Idol."

Summer enrollment is now open, but limited spots are available.

The summer schedule is as follows:

• Guitar and bass guitar lessons- 10 a.m. through 5 p.m. on Thursday and Friday

They also offer 30 minute private lessons once a week for all ages in guitar, drums, bass, piano, voice and trumpet. All styles are taught including pop, rock, country, metal, jazz, blues and hip hop.

The school is also asking local businesses or individuals who are interested in teaming up with Pinnacle Music Academy to provide scholarships for students who may not otherwise be able to take music lessons to contact them at either 409-241-3920 or http://www.pinnaclemusicacademy.com/contact.

Additionally, this month they are giving away a guitar and two free lessons.

"A special thank you to our sponsor Good Shepherd Lutheran Church who made this giveaway possible," as stated on their Facebook page. 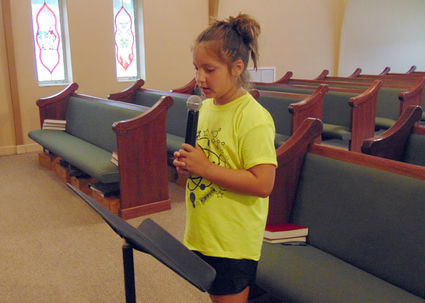 Kendal Krailo, 8, practices her singing at Pinnacle Music Academy in Bridge City last Thursday. The school opened in May to guide and equip budding young musicians in the area.

Complete the following steps to win the guitar: