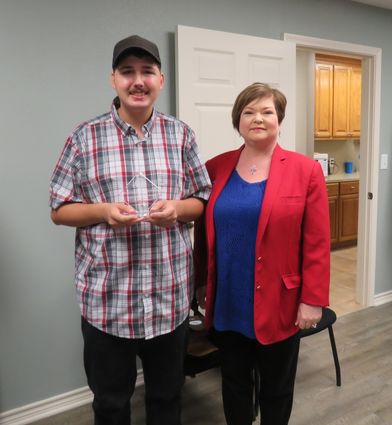 The Bridge City Chamber of Commerce is delighted to announce that Logan Hoffpauir who works at California Corndogs has been named July Employee of the Month.

Logan was presented his award, sponsored by Sabine River Ford, by B. J. Hanneman, Director of the Bridge City Chamber of Commerce, at the chamber’s July Networking Coffee hosted by CASA of the Sabine Neches Region.

Logan has worked at California Corndogs, more commonly known as “the corndog stand by Bridge City Walmart”, for one year. He was nominated for employee of the month by Pattie Steele. Pattie nominated Logan because of his uplifting smile, friendly demeanor, and good manners no matter if the weather is hot, cold, wet, or dry.