Photo: The 1977 Bridge City High School class ring of Greg Hock is back on its owner’s finger Tuesday after being missing for nearly 40 years.

As reunions go, Greg Hock figured the Beatles had a better chance of getting back together than he did of ever again seeing the 1977 Bridge City class ring he’d lost before he was 20.

The help of folks like Frank Scales, Charlotte Schexnider Chiasson, the creator of and an administrator for the Bridge City High School Alumni page on Facebook ...

Or the thoughtfulness of Lori Dawson.

“A lot of people were involved in getting this back to me, and I’m very appreciative,” Hock, a contract pipe designer at DuPont, saidTuesday, showing off the ring at his home in Orangefield.

“It’s something I can pass down to my daughter. And hopefully, she won’t lose it.”

Dawson, who went by Loretta Swinburn growing up as a member of Bridge City’s Class of 1970, was nearly hit in the head by the ring when the blades of her father’s riding lawnmower unearthed it in 2005.

“Something whizzes by my head and it’s a Bridge City class ring, from the Class of 1977,” she recalled.

A 20-year Air Force vet who served two terms in Vietnam, Dawson soon returned from visiting her parents to her new home in Las Vegas, Nevada.

“I threw it [the ring] in the jewelry box and left it in there,” she said.

“When I got back from Vegas, I told my son, ‘We’ve got to start trying to find owner of this ring.’”

But things got busy.

And then last week happened.

Lori, recently retired a second time, lives with in Las Vegas with her son Jeromy, daughter-in-law Wendy and her granddaughter.

She follows the alumni page Scales created and keeps up with events reported by Chiasson, a local historian who is also a member of the Class of 1970.

When the class ring was rediscovered last week still in the jewelry box, Dawson decided to see if her daughter-in-law could photograph the ring and upload it to the alumni page.

“Within 30 minutes, we found the owner of the ring.”

It was Don Hock, Greg’s brother, who identified the ring, helped by the fact that Greg’s initials, DGH, were printed inside.

“I got a call from my brother in California and he asked me if I’d lost my high school ring,” Greg Hock said.

“I’m not on Facebook. The chances of me finding it without that page would have been slim to none.”

Greg Hock said he was working as a carpenter and living with his other brother, Joey, after graduation.

“I kept my ring in my sock drawer, along with all my money,” he recalled. “When it came time to move out, I couldn’t find that ring.

“I just chalked it up to being stolen. I never expected to see it again.”

Identifying it was easier, Hock said, because in his graduating class of about 150 students, he was one of the only ones who ordered a ring of white gold. And he had it capped with his birthstone, aquamarine.

But identifying it wasn’t the only hurdle.

After Dawson shipped it to Orange, it disappeared for a couple of days at the Orange Post Office.

“I was at the post office when he found it behind a desk,” Hock recalled.

There was happiness to go around.

“It was so quick, it was unbelievable,” Chiasson said. “That’s how the alumni page comes to help.” 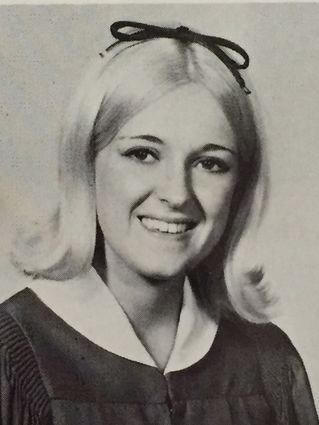 Lori Dawson of Las Vegas, Nevada, was known as Loretta Swinburn when she posed for her yearbook photo as a senior in the Bridge City Class of 1970. Facebook helped her find Greg Hock and return to him his missing class ring.

Four decades and a few pounds of weight gain have made the ring a tight fit for Hock.

“I’m so happy that Greg got his ring back,” Dawson said. “I told him to take it Mathews or Zales and have it resized, so he could wear it.”

Hock was wearing the ring proudly Tuesday. On his pinkie finger.