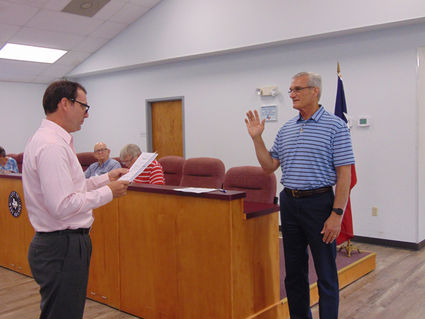 The Rev. Randy Branch, right, receives the oath of office from Rex Peveto, West Orange city attorney, at the regular city council meeting Monday night. Branch will serve out the remainder of former councilman, Carl Thibodeaux, who was appointed as a municipal court judge in the city.

There was a new city councilman seated on the West Orange City Council.

He officially and immediately resigned his city council.

Branch has been a resident of West Orange for 45 years, he has lived at his current residence for 32 years. He retired from DuPont after 35 years.

Branch said his name was brought up at a prior council meeting. He added that he gave a little thought about serving because it interested him.

"Maybe I'll be involved in public service a little more than I was," Branch said.

Mayor Roy McDonald said he wanted to thank the several city council members who advised Branch the pros and cons of being a councilman.

In other city council business, a public hearing was to be held Tuesday evening to close out the Texas Community Development Block Grant Program.

McDonald said a water improvement grant of $250,000 was used for the water department to replace bad lines. Water was infiltrating into the sewer system. The grant was used for low to moderate income areas of the city.