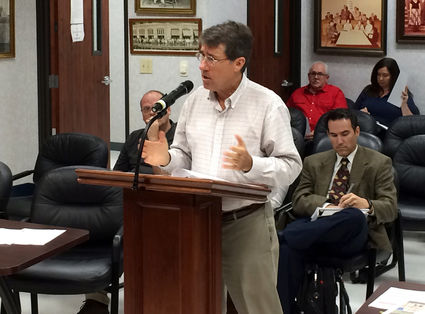 Cutline: Britten Barr, architect with the Texas Historical Commission, congratulates Orange County Commissioners Tuesday for earning a $177,000 grant to repair the marble front to the County Courthouse, which was built in 1937.

Any Orange County homeowners who haven’t removed storm damage from last summer’s Tropical Storm Harvey have until Aug. 1 to get their debris to the right-of-way.

“It has to be original tear-out debris [for damage caused by Harvey],” Joel Ardoin, Orange County emergency management coordinator, said at Tuesday’s meeting of Commissioners’ Court.

“If they see any new debris on the pile, they will bypass the whole stack.”

Additionally, Ardoin said, those taking advantage of this late deadline will need to call into the county’s debris hotline at 409-745-9809 to notify workers that a debris pickup is needed.

Ardoin said federal and state officials will be on hand at 6 p.m. Tuesday, July 24 at the Expo Center, to answer all questions about the buyout, elevation and acquisition programs being conducted by FEMA and the Texas General Land Office.

The county has invited the owners of 355 homes “substantially damaged” by Harvey to attend, but attendance is not limited to only those homeowners.

“The general public is invited,” he said.

Ardoin explained the term “substantially damaged” refers to homes located in Special Flood Plain Hazard Area A Zone that have damage estimated to be at least 50 percent of the property’s worth.

Causing the county to move its informational meeting back a week is the fact the Southeast Texas Regional Planning Commission had also scheduled a July 17 meeting at Orange Public Library. That meeting is a Public Hearing regarding the SETRPC’s plan to distribute HUD Community Block Grants.

Commissioners got a cheery report from the Texas Historical Commission’s Britten Barr during a morning work session to discuss efforts to repair the marble front to the County Courthouse, which was built in 1937.

He complimented the county staff for being approved for a $177,000 THC grant on the first try.

“I’m working now with a county that needed eight years to get its grant approved,” Barr said.

In Tuesday’s commissioners’ meeting, the county approved a move of $50,000 in unused funds for a Way Service environmental contract to the courthouse project.

That, according to Commissioner Barry Burton, means the county has the $177,000 in matching funds needed to begin the courthouse repair.

Barr estimated it would take four to five months to complete the project. Architects and principals for Houston’s HDR Inc. and Jay Firsching, historical preservation specialist with ArchiTexas, also attended.

Michelle Tubbleville, special projects coordinator for the county, congratulated volunteers for a food distribution in Vidor on July 6. Food boxes from the Southeast Texas Food Bank were given out to 800-plus people in 342 cars, she said.

Information about available hurricane season resources is available as well as on-site disaster management for those with unmet needs from Tropical Storm Harvey.