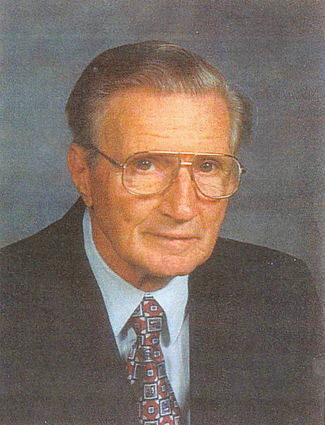 Born on November 26, 1926, in Henderson, Texas, during the depression, Ernie was big brother to two siblings, grew up on a working farm, and helped his mother grow huge gardens so vegetables could be shared with friends and neighbors. Ernie Little lived by “It is more blessed to give than to receive.” Ernie never saw a task too large or too expensive that he could not solve or repair, even after an Army injury left him hospitalized for over a year.

Ernie retired from Dupont, Orange, after many years of distinguished employment.

As a master electrician, he owned and operated Little’s Heating and AC business in Bridge City, TX. Always, a volunteer, Ernie took a team from his church to Arizona to build a church in 1967.

After that, he traveled to Mexico and all over the United States with Volunteer Christian Builders, 8 Days of Hope, New Mexico Baptist Men, and the North American Mission Board to help build or remodel churches, parsonages, and Christian camps.

His skills as an electrician were sought at many volunteer jobs because he could look at a blueprint and solve problems before they became a problem.

Another volunteer recalled Ernie as being the EF Hutton of electricians, because when Ernie spoke, everyone listened.

After meeting his second wife, Beverly, they enjoyed traveling and became faithful volunteers in numerous state parks, Christian camps, Focus on the Family, New Mexico Southern Baptist Disaster Relief, and others entities, always reaching out to help others, regardless of the need. Ernie’s Biblical knowledge and his prayers blessed many, especially Beverly.

Reflecting his love for his Lord and Savior Jesus, Ernie was a faithful member of Taylor Memorial Baptist Church, Hobbs, New Mexico.

He was a long-time Sunday School teacher and deacon of First Baptist Church, Bridge City, and a 50+ year member of the Bridge City, Texas, Masons.

Ernie was a member of 307th Airborne Engineer Battalion, training to go to Korea when a parachute malfunctioned and failed to open properly, leaving him hospitalized recovering from injuries.

After the hospital discharge, he was recalled again by the Army and trained as a cook before being honorably discharged in 1951.

His disabilities never capitulated to his compassion and love for others.

He leaves family and friends from Oregon to New Hampshire and from Mississippi to Michigan to cherish his memories.

On July 13, 2018, Ernie was called to be with his Lord Jesus, his first wife Katherine Marie, his two younger brothers, Doyle and Charles Hubert, and his parents Walden A. Little and Eva Joe Strickland Little. God gave us a gift named Ernest Harold Little, and we gratefully received him.