Pinehurst has one. Bridge City too. Now Mauriceville has one.

What all of these communities have in common is they have farmer's markets.

The Mauriceville Heritage Association, likewise, hosts a weekly farmer's market from 5 p.m. to 8 p.m. on Thursdays at the Mauriceville Community Center, 7441 Cohenour Road, under the community center pavilion. A number of vendors — from food to crafts — began setting up shop six weeks ago.

For instance, Denee' Marks, of Vidor/Mauriceville, sells homemade earrings and more, such as headbands for little girls. She started making and selling her own products because similar items found at boutiques costs more, she said. She makes sets of earrings from scratch while she's experimenting making new ones. She now has a new machine in which she can make better and other designs. For example, she's just starting to make necklaces.

Marks also sets up at the farmer's market on Saturday mornings in Bridge City.

"I'm testing the waters to see if I can make any profit," she said. "I've been doing this for two months. I'm doing okay. I started selling to my friends and family. I have a Facebook page named Denee's Designs with a rewards program where customers can receive a free pair of earrings after their sixth purchase (The free pair must be $12 or below)."

Her next door neighbor at the market, Sam Vaughn, of Mauriceville, owns Sam's Scratch Made Goods. She sells goodies such as fudge, breads, cakes and cupcakes.

"I've been selling to the public for two months. Before that, I baked for my family. It's been lucrative. I have a Facebook page too," she said.

She's also hosting a Christmas in July special on her Facebook page. Vaughn said her jalapeno cheeese bread is a big seller.

Pre-orders and personal orders can be made from her Facebook page.

Jodie Turner was vending car scents, candles, two-in-one scrubbies and farmhouse wash cloths; all of it handmade. Her daughter, Emily Turner, makes some of the products and she has a Facebook page named Got Wicked Scents.

Leslie and Donald Fabriguez's booth feature bowl holders for when your bowl is either too hot or too cold to touch, kitchen boas, travel pillows, aprons and a mini quilt, all handmade.

Leslie said she's been making and giving away the items as gifts before she set up shop at the Mauriceville Farmers's Market.

"I've been sewing for many, many years. I make all kinds of stuff," she said. "I like quilting. I sew for the fun of it. I enjoy it and I live right down from the house (from the community center)."

Next to them is Debbie Thibodeaux. He husband, Glenn, paints clear and/or white fishing lures from hand.

"He uses a small air brush," she said. "He puts the eyes on them and the hooks and the little tails. He uses cedar wood and cuts them in three sections lures with the rattles. He sends some of them overseas."

Glenn got his start making fishing lures after his nephew gave it a try. He loves to fish and he watched how his nephew made them.

"He has a wood shop and he's a great painter," Debbie said. "We'll see if this takes off. We sell these at Christmastime and at church bazaars. These colors you can't get anymore. People ask for them because they don't make them anymore. He'll take special orders from the guys he works with."

Kirista Shehane, secretary with the Mauriceville Heritage Association, said the farmer's market is doing far better then they thought it would do.

"We're please with the community and the county's support," she said.

The association wanted to use the Crawfish Festival grounds throughout the year. The farmer's market could be such an outlet to benefit the community after the festival was over. Particularly for the community to come back whole following Tropical Storm Harvey.

"We got it off the ground. We support the local vendors and we've added several new ones," Shehane said. "Our vendors have produce and handicrafts and it's no cost for them to set up. And maybe they can sell something and possibly make a profit. For some vendors this helps make ends meet."

It's unsure how long the farmer's market will last this year, but Shehane said one possibility is it may end the second weekend in October after the barbecue cook-off and the vintage market.

Thursday night was chosen to schedule the farmer's market because Saturdays are busy for people and there are other markets in operation that day.

"Thursday works best for everyone. It's a different evening than other markets," she said.

Furthermore, Shehane believes the events sponsored by the Mauriceville Heritage Association harbor a good community connection and a place for farmers to sell their wares as well as a place for the community to gather.

"That's important to me. Especially since I'm a daughter of a dairy farmer," Shehane said. "We've also written and secured some grants for the community center that was damaged by Harvey.

"Mauriceville was hit pretty hard by Harvey. It's nice to see things get back to normal."

Cynthia Doucet is in charge of marketing for the Mauriceville Heritage Association.

She said they saw the need for a local farmer's market in their community and they were happy to provide a space, at no charge, to the vendors or the consumers. 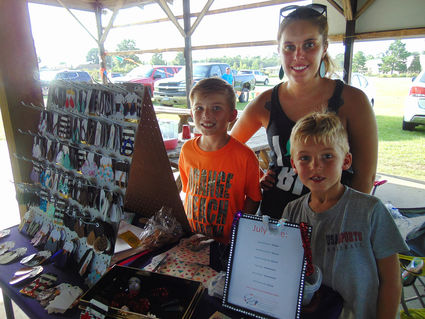 Denee' Marks, of Denee's Designs, sells handcrafted jewelry and girls' headbands at the Mauriceville Farmer's Market on Thursday evening. She also sets up at the Bridge City Farmer's Market on Saturday mornings. Here, she is with her sons Keagan, right, and Grayson.

"This weekly gathering of local farmers and food sellers continues to grow and provide an economy boost to local people in need," she said. "The MHA is constantly looking for ways to build strong community connections and promote positive outcomes for the people who live in North Orange County."

Some housekeeping rules for the market: gates will not open until 5 p.m. so vendors can completely set up, according to their Facebook page. Most vendors, thought, sometimes sell out by 7 p.m.

New vendors are more than welcome to set up. Interested vendors should call or text 409-659-3998 for permission to set up. Vendors must be in the gate by 4:30 p.m. Vendors ONLY are to enter through Gate 3 past the pavilion by 4:30 p.m.