Maybe, you too, can become the next Liquid Picasso.

Peggy's Place, 2682 East Roundbunch Road in Bridge City, is hosting a painting event on Monday nights. Christina Jarrell, the painting teacher, is originally from Mississippi. She and her husband do renovations work and eventually landed in Texas after Tropical Storm Harvey.

She said there's no local sit and paint places nearby. She figured one here would do well and especially help with the stress following Harvey.

"This can help you not think about things," she said. "It's a play on liquid courage with BYOB to loosen you up a little bit. Some are intimidated to paint."

Peggy's Place owner, Peggy Abair, said five people attended the first night this past Monday to paint turtles. One attendee said she would tell her coworkers about Liquid Picasso.

Jarrell said she can also do private parties at homes. Appointments can be made during the week by calling her at 228-806-0105. She added that she can do other parties and/or other special occasions.

Jarrell said she has no formal training with painting and she has never been to a sit and paint establishment.

"We're playing it from the hip and seeing where it goes," she said. "We're off to a good start."

They'll also try other crafts. For instance, next Monday will be called Dirty Pour- pouring several different colors into one cup and then pouring the cup on a canvass or flipping the paint on the canvass.

Abair said part of the process is also asking attendees what they would like to do.

"We'll push things a little out of the box. The hard part is to get going. This is fun art, not fine art," Jarrell said.

Jarrell offers any size of canvass the painter prefers and she furnishes all supplies for $30. She said other places charge twice that amount for supplies. She added that they don't want to be unaffordable.

Peggy's also holds Texas Hold 'Em and other card games on Saturday afternoons. It cost $5 for a seat at the table and $20 to buy in. Those who arrive early can get some extra chips. First, second and third place awards are given along with a special medallion that reads, "I won this at Peggy's Place."

Abair said there is seating in the front for eating and they have additional seating and folding tables to accommodate. She added that by booking a party by calling her at 409-886-1115, she can make the night the same theme as the party's theme. It cost $200 to book both rooms and Peggy's can cater the affair. The cleanup fee for Peggy's crew to do it cost $100.

Customers can also bring in their own food and/or drinks. Abair said she can cook a home cooked meal, even desserts, if she's told ahead of time.

"There's no place for kids to do anything, and it's really hot outside," she said. "Kids can play video games in the other rooms while their parents paint. 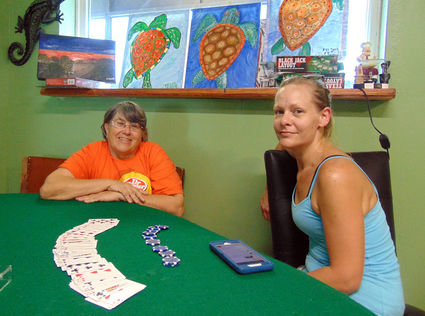