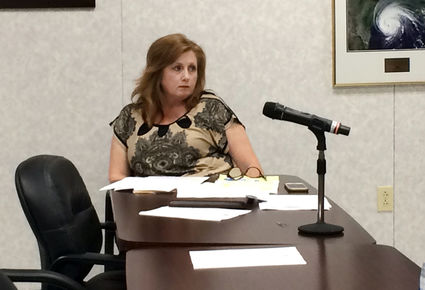 But with a new county judge in Dean Crooks seeking to speed up his learning curve, the Administration Building downtown is transforming into Meet Around the Clock.

Since last Tuesday, the Commissioners’ Courtroom has hosted four budget workshops, three other workshops on insurance, hiring policy and public information, plus two sessions of the weekly commissioners’ court.

A workshop on dependent’s insurance and another budget hearing are set for Thursday and Friday.

It’s all a part of a long process to develop a budget for the next fiscal year, which begins October 1.

Jody Crump, two-term Precinct 4 Commissioner, was asked if holding so many meetings was normal.

“I would say define normal,” he said. “Under a different judge, he’s going to have a whole different mentality on how to do things. What he’s going to establish as normal might be that.”

Crooks has replaced Stephen Brint Carlton as county judge after beating him in March’s Republican primary.

“The first year Judge Carlton got involved with it, I think he started budget hearings in February,” Crump said. “We met for months after that.

“When you get to budget season, you have to just tell yourself, ‘Yeah, we’re going to be over here a lot.’”

At Tuesday’s commissioners’ meeting one of the things voted for was to eliminate a six-week hiring freeze for replacements for some county jobs.

That freeze was the subject of one workshop earlier this week.

It was put in place to make sure that a retiree’s final payout for unused vacation and sick days and other benefits did not put the county into a cash-flow problem.

Crump was the only one on the five-member court casting a nay vote.

It was the only vote Tuesday not resulting in a 5-0 vote.

Commissioners paid $727,000 of bills. Those included $284,000 Orange County will be reimbursed as part of a joint operation with the Port of Beaumont and $175,000 for employee, retiree and dependent health care insurance and retirement for July.

There were five line-item transfers approved, moving money inside departments.

Commissioners also agreed to pay $167,460 in one payment for new voting equipment expected to be utilized in November.

They voted to continue a $10 annual road-and-bridge fee and a memorandum of understanding to allow the Coast Guard space at the Expo Center if a disaster knocked out the Guard's facility.

Wendorf, Beward and Partners were asked to continue their work as FEMA and HUD grant consultant in the aftermath of last year’s Tropical Storm Harvey.

Joel Ardoin, county emergency management coordinator, estimated the final cost of debris cleanup for the county’s unincorporated areas at up to $20 million.

The county has estimated the cost to repair roads destroyed by Harvey will also be $20 million. The federal government, through the Federal Emergency Management Administration, has pledged to partially reimburse most storm expenses.

Tuesday, Ardoin said he is billing FEMA for about $1 million for overtime for county employees during the period of the declared emergency.

The unpaid insurance deductibles for county buildings and other materials will be submitted to FEMA also, once insurance payments are received.

Prior to Tuesday’s commissioners’ meeting, there were workshops to hear from five county department heads on their staffing and equipment needs for 2018.

It was the third such meeting, plus one held to reclassify employees to a higher rung on the pay matrix because of a change in their duties.

Commissioners also held a workshop to discuss better ways for communication with citizens and focused on a phone app being adopted by area Chambers of Commerce.

Commissioner John Gothia of Precinct 3 said it’s called “Slice of Orange” and would cost the county $6,000 to participate.

“We’re just trying to figure out different ways we can reach our people better,” Gothia said.

“There are so many different forms of communication that are out there now: Some people read the newspaper, some people listen to their radio and some just use their phone exclusively.

"We’re just trying to make sure we have a piece of that.”