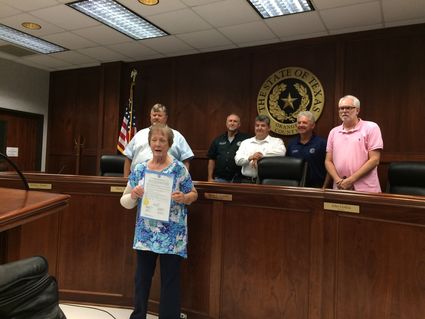 Cutline: Linda Hughes of Meals on Wheels poses with Orange County Commissioners Tuesday after they approved a $45,000 grant for the non-profit.

The money wagon hit a bump in the road Tuesday afternoon at Orange County Commissioners’ Court.

A cash flow problem nearly scuttled an unexpected request to add $5,000 to an annual $40,000 grant from the county to keep Meals on Wheels on the road.

The shortage in liquidity resulted from a shortage of reimbursement checks from FEMA after Tropical Storm Harvey.

Zilch is how much FEMA has repaid so far.

But a check for $9.2 million to reimburse the county for early debris hauling is expected “any day.”

“Joel, when are we getting the check?” Commissioner Johnny Trahan asked Joel Ardoin, the county’s emergency management coordinator, after commissioners considered tabling the request by Linda Hughes for a week or two.

“A couple of more weeks, according to their timeline,” Ardoin said.

It was a 5-0 vote to help keep alive a program that lost clients and state grant money after Harvey.

The annual financial report by Pattillo, Brown & Hill showed the county with a total fund balance of $9.9 million on Sept. 30, 2017, the end of the fiscal 2017 budget year.

“But you anticipated that,” Pruitt told commissioners, “and you’re actually $4 million better [than anticipated in the budget.]”

County Judge Dean Crooks, who just joined the court in May, listened intently.

“I appreciate that they were able to give us some information that, I hope dispelled some things, maybe clarified some things that had been said.

“One of the big things was the $12 million and it being found,” Crooks said.

He was referring to a story in this paper a year ago. In it, former County Judge Stephen Brint Carlton told how reductions in spending by employees and some luck -- like nearly $1 million in unexpected BP oil spill cleanup funds -- had combined to give the county a much-better bottom line than expected.

“Looking at the progression they had,” Crooks said, “this was an increase that had been happening over a course of time. We didn’t get into the details, but at least it showed there was no money hidden in a wall.”

Commissioners’ day Tuesday was stuffed. It began with the first of several public budget workshops, with staff projecting their needs in 2018. A 45-minute workshop about insurance immediately preceded the 2 p.m. court.

Near the end of the two-hour court session, commissioners voted 5-0 on a 2018 medical, prescription and dental insurance package for employees, dependents and retirees that is 8.3 percent higher than last year.

A year ago, the county paid a 14.8 percent increase on medical insurance.

Votes on a new vision plan and a wellness plan were set aside for a later meeting.

Commissioners also agreed to spend $1,143 for a system to videotape commissioners’ court meetings.